Romania’s parliament has unanimously endorsed a plan to hold a national referendum on anti-corruption reforms after mass street protests made the government back-pedal over a controversial corruption decree.

All 310 MPs present voted on Monday in favour of the proposal by President Klaus Iohannis, a strong supporter of the country’s anti-corruption drive.

Iohannis, a former leader of the centre-right opposition, blasted the government over the decree that would have effectively shielded dozens of public officials from prosecution and torpedo a drive to stamp out high-level corruption.

The architect of the decree, Justice Minister Florin Iordache, resigned last week, citing a need to appease public opinion in the EU member state of 20 million people and arguing he had done nothing wrong.

The protests, which peaked on February 5, with more than 200,000 people in the capital, started after Prime Minister Sorin Grindeanu’s Social Democratic (PSD) cabinet watered down anti-corruption rules with the decree.

The government survived by repealing the decree, but the protests continued – though on a far smaller scale – because demonstrators wanted to keep up the pressure against possible plans to create loopholes for corrupt politicians, similar to those in the withdrawn decree.

Wording and date not clear

Iohannis now needs to come up with a timeframe to hold the referendum. While the wording on the ballot paper is up to the president, he said last month he wanted to hold the vote to see “the sovereign desire of Romanians”, over the anti-corruption drive.

According to law, a 30-day campaign must take place before the vote.

The parliament, where the ruling coalition holds a big majority, must still vote on whether to confirm the decree’s withdrawal.

On Friday, Liviu Dragnea, the Social Democrat leader and lower house speaker, said parliament should meet to approve the withdrawal as soon as possible.

The parliament’s vote on the presidential referendum plan was a necessary procedural step, but its opinion is not binding.

Anti-government demonstrators took to the streets for a 13th consecutive day on Sunday.

The protests are the largest since the fall of communism in 1989. 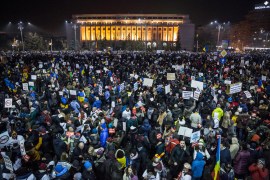 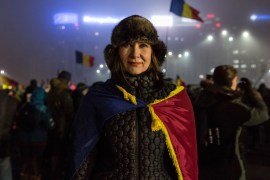 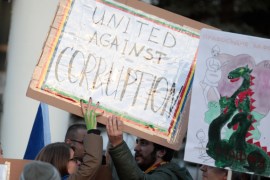 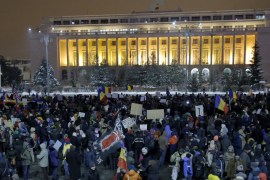 Protesters brave freezing temperatures as they take to the streets against attempts to water down anti-corruption laws.