Nearly 200,000 people living below the tallest dam in the United States have been asked to evacuate as a spillway appeared to be close to collapse.

Authorities issued the abrupt evacuation orders at about 00:30 GMT on Monday, saying that a crumbling emergency spillway on the Lake Oroville Dam could give way and unleash raging floodwaters onto a string of rural communities along the Feather River.

“Immediate evacuation from the low levels of Oroville and areas downstream is ordered,” the Butte County sheriff said in a statement posted on social media. “This is NOT A Drill.”

Evacuation centres were set up in Chico, California, about 20 miles northwest of Oroville, but roads leading out of the area were jammed as residents sought to drive out of the flood zone.

Earlier, the California Department of Water Resources said on Facebook that the spillway of California’s Oroville Dam was “predicted to fail within the next hour”.

The water resources department said crews using helicopters would drop rocks to fill a huge gouge in the spillway. Authorities were also releasing water to lower the lake’s level after weeks of heavy rains in the drought-plagued state.

By 06:00 GMT, state and local officials said those efforts had paid off and, with water no longer flowing over the eroded spillway, the immediate danger had passed. But they cautioned that the situation remained unpredictable.

Bill Croyle, the acting director of the Water Resources, told a news conference: “Once you have damage to a structure like that, it’s catastrophic.”

Meanwhile, a spokesman for the National Guard said it would provide eight helicopters to assist with the spillway’s reconstruction and said around 23,000 soldiers and airmen had been alerted to be ready to be deployed.

The Oroville  dam, which serves mainly for water supply, hydroelectricity generation and flood control, activated its emergency spillway after weeks of heavy rain caused the reservoir to rise above its capacity. 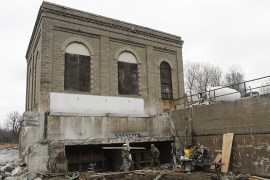 After decades of industrial pollution, the Mohawk nation has succeeded in knocking down the Hogansburg Dam in New York.