Security forces – including the Spanish Civil Guard and National Police Corps – used batons and shields to strike and charge at peaceful protesters causing multiple injuries, according to a report by the rights group released on Thursday.

“The police may well have had the law on their side to enforce a court order but it didn’t give them the right to use violence against peaceful protesters.”

HRW documented the excessive use of force by officers in the cities of Barcelona and Girona, and received a number of other allegations regarding ill-treatment of protesters by police.

The organisation called on officials from Catalonia and the Spanish government to “cooperate fully with an independent investigation into the violence”.

Nearly 900 people were injured during the region’s disputed vote on secession from Spain on October 1, according to regional and national authorities. More than 400 police officers were also injured.

The report comes as Spain prepares to celebrate its National Day on Thursday, despite the ongoing political crisis.

The separatist movement secured a 90-percent vote in favour of independence but a unionist boycott of the vote meant turnout stood at just 43 percent.

Spanish Prime Minister Mariano Rajoy has given Catalonia’s President Carles Puigdemont five days to clarify whether or not he has declared the region independent.

Puigdemont suspended any declaration of independence to allow for talks with the central government in Madrid during a speech to the Catalan regional parliament on October 10.

Article 155 of the Spanish constitution allows the central government in Madrid to take direct control of any of the country’s 17 autonomous regions – of which Catalonia is one – if they are deemed to be breaking the law.

Spain’s constitutional court ruled to suspend the referendum last month, on the grounds that the country’s 1978 Constitution states Spain is indivisible and gives the national government the exclusive power to hold referendums.

Catalans previously voted in favour of seceding in a non-binding referendum in 2014, with 80 percent in favour. 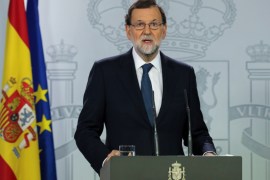 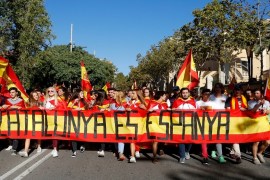 As thousands rally for unity, prime minister says government will ensure independence declaration ‘comes to nothing’. 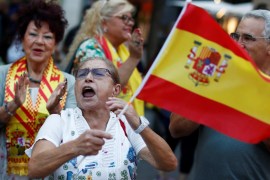 Opponents of Catalonia’s push for secession called for demonstrations around Spain and a major rally in Barcelona. 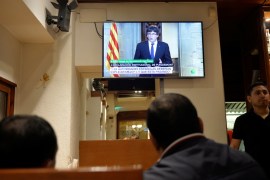 Catalonia’s regional president criticises the king of Spain as he renews call for dialogue – a request denied by Madrid.