Soldiers have shot and killed at least seven people and wounded others in Cameroon‘s English-speaking regions during protests by activists calling for its independence from the majority-Francophone country, according to official and witnesses.

Sunday’s demonstrations – timed to take place on the anniversary of Anglophone Cameroon’s independence from Britain – came as a months-old movement against perceived marginalisation by the Francophone-dominated government gathered pace.

Cameroon’s divide has its roots in the end of the first world war, when the League of Nations divided the former German colony of Kamerun between the allied French and British victors.

Donatus Njong Fonyuy, mayor of the town of Kumbo, said five prisoners were killed at around 6am local time (05:00 GMT) after the jail where they were being held caught fire.

“We don’t know what caused the fire in the prison … But five prisoners were killed by soldiers. Two were wounded by bullets and are at the hospital,” he told Reuters news agency, adding that another two civilians were also injured.

In other incidents in Kumbo, soldiers shot and wounded two demonstrators around midday who had raised the blue and white flag of the Ambazonia separatist movement in the town.

Another was killed later attempting to do the same at the local chief’s palace.

Police and army officials were not immediately available to comment on the shootings.

“We won’t use violence unless there is major cause. There are numerous risks, even terrorist risks. We’re keeping calm,” a security source said earlier in the day.

The protests, which began late last year, have become a lightning rod for opposition to President Paul Biya’s 35-year rule.

Writing on his official Facebook account, Biya condemned acts of violence “regardless of their source and their perpetrators”.

“Let me make this very clear: it is not forbidden to voice any concerns in the Republic. However, nothing great can be achieved by using verbal excesses, street violence, and defying authority,” he said.

Authorities had banned all gatherings of more than four people, ordered bus stations, eateries and shops to shut and forbade movement between different parts of the English-speaking regions before the protests.

The government also ordered Cameroon’s border with Nigeria closed for the weekend.

Businesses were shut in the regions’ main cities, Buea and Bamenda, where military helicopters circled overhead.

One protester was killed on the edge of Buea as security forces attempted to block pro-independence marchers from entering the city, three witnesses said.

Hundreds nevertheless slipped through the countryside to get around the blockade and into the city, where security forces used tear gas to try to stop them from marching on the regional governor’s office.

A Reuters witness also heard gunfire, though it was not clear whether the shots were targeting protesters or being fired in the air.

“I now know that the Biya regime has been raising an army all these years to fight its own people,” said one Buea resident, who asked not to be identified out of fear of reprisal.

“The military, which is supposed to protect lives and property, has turned into our greatest nightmare.” 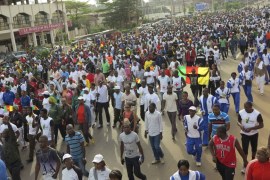 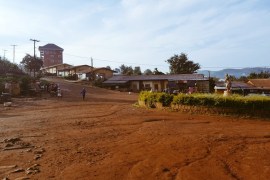 Linguistic tensions boil over in Cameroon

English-speaking population stage protests in the latest in a series of actions against their perceived marginalisation.