Srinagar, Indian-administered Kashmir – At least three suspected fighters and one Indian soldier have been killed in Indian-controlled Kashmir after an assault on a paramilitary base, according to local government officials.

The attack began in the early hours of Tuesday when three fighters raided the heavily guarded Border Security Force (BSF) camp outside a regional airport in Humhama, 17km from Kashmir’s main city, Srinagar.

The operation against the fighters continued into the afternoon as hundreds of police, paramilitary and army personnel surrounded the area.

Munir Khan, Kashmir police chief, told Al Jazeera that the operation ended later on Tuesday when all three attackers were “neutralised”. He said one BSF soldier died and three others were wounded.

Flights to and from Srinagar International Airport were initially suspended after the attack, but resumed later on Tuesday.

“The flights are continuing and one flight has just landed in the airport from Delhi,” Khan said.

Locals residing close to the airport said they had been woken up by the sound of heavy gunfire.

“Initially, we thought it is the usual airdrop that happens around the army camps here,” Qazi Anjum, who lives 100 metres away from the airport, told Al Jazeera.

“But it continued intensely for a long time, after which we panicked and came to know that it is an attack.”

Armed groups have been fighting for decades for the Indian-administered portion to become independent or merge with Pakistan.

Nearly 70,000 people have been killed in the fighting and the ensuing Indian military crackdown.

Anti-India sentiment runs deep among Kashmir’s mostly Muslim population and most support the separatists’ cause against Indian rule.

India has accused Pakistan of arming and training the fighters, which Pakistan denies.

The latest attack comes amid a major offensive by the Indian army in south Kashmir districts.

More than 130 fighters have been killed by the military this year, according to officials.

Last year, fighters attacked an Indian army base near the frontier town of Uri, killing 18 soldiers. 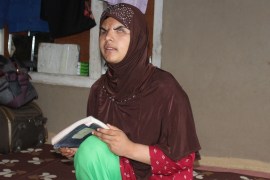 Aged 14, Insha Mushtaq was watching protests from her window when Indian security forces fired pellets into her eyes.