Winter has set in with a vengeance across much of Central and Eastern Europe. The reason for the frigid blast is a strong area of high pressure that has settled over western parts of the continent.

The location of the high-pressure system, or anticyclone, means that the past few days have seen a cold northerly blast extend from Scandinavia to the Levant countries.

Kiev is facing temperatures of around minus 15 Celsius. This is around 11 degrees below the January average.

The air is even more frigid in Moscow, where we could see temperatures struggling to reach minus 25C throughout this weekend. We would normally expect highs nearer minus 9C.

Further south, we’ve had an area of low pressure dominating the weather, bringing relatively mild, moist air across the Mediterranean. This feed of moisture readily turned to snow as it moved over Italy, the Balkans and across the Black Sea.

Naples had seen a rare covering of snow, as the wintry blast hit southern and central Italy on Friday, making clean-up work harder for firefighters in the quake-destroyed town of Norcia.

On the other side of the Adriatic, much of Bosnia was covered in snow on Friday. They then struggled to reach minus 11 in the heat of the day.

The snow brought traffic to a halt in many areas and some mountain roads were completely sealed off. Cold weather warnings have been issued and the bitter weather is expected to continue into the beginning of next week.

Greece is expecting significant snowfalls this weekend, with temperatures barely getting above freezing in Athens. The same is true for much of Turkey, where we’ve had heavy snow on and off since the turn of the year.

The latest snowstorm stopped all flights in and out of Istanbul’s main Ataturk Airport for a time. The snowfall has also caused hundreds of village roads to be blocked in the eastern provinces of Turkey.

Romania, Bulgaria and Ukraine have had blizzards on and off for much of this week and further snow and strong winds are forecast as the winter storm extends into western Russia.

Elsewhere, a separate area of snow is currently moving out of Sweden and Finland into the Baltic States. We may well see a spell of freezing rain early in the weekend across northeastern France and the Low Countries. 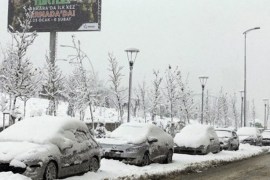 Snow returns to Turkey for second time in two weeks

More winter fun and less travel disruption is the result of the latest winter storm. 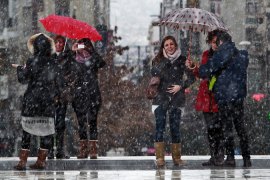 Snow and ice spread across southeastern Europe bringing many their first snow of the season.