A gang of dozens of armed robbers have stolen several million dollars from a vault in Paraguay, in what local officials are dubbing the “robbery of the century”.

Initial estimates placed the cash haul at around $40m, but a spokesman for Prosegur, the private security company targeted in the raid, denied these reports. Authorities did not release any information on how much money was stolen.

The culprits, who police said were from Brazil, killed one police officer during the Monday raid in Ciudad del Este, the South American country’s second-largest city.

Officials said three civilians were injured in a blaze of gunfire and torched vehicles during the three-hour attack.

Three robbers were killed hours later in an ensuing gun battle with Brazilian police across the border, the Paraguayan Interior Ministry said.

Five members of the gang were arrested in Itaipulandia, 50 kilometres north of Ciudad del Este, the ministry added.

The robbers, armed with assault rifles, used explosives to gain access to the vault at a cash-storage facility in the Paraguayan border city, which is known for its criminal gang activity.

Up to 80 people may have been involved in the attack, said Arsenio Correa, investigations chief in the city, told Associated Press.

“The criminals used snipers to guarantee the escape and torched more than 10 vehicles to distract the police,” he said.

Ciudad del Este sits in the “Triple Border” region, where Paraguay, Brazil and Argentina meet and where contraband electronics, drugs and arms flow across porous borders.

Primeiro Comando da Capital, or PCC, a major criminal organisation in Brazil, were suspected of being behind the attack police spokesman Augusto Lima said, according to a report by the German news agency. Armed with assault rifles, the culprits are thought to have made their escape to Brazil by motorboat via the Parana river.

Some of the stolen money was recovered, according to newspaper ABC Color. 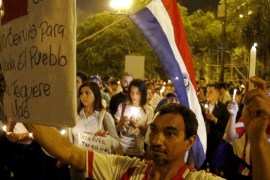 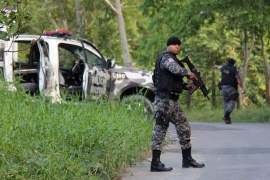