Scores of rebel fighters and their families have begun leaving the last opposition-held neighbourhood in the Syrian city of Homs, Syrian state TV and a monitor said, as part of an evacuation deal that began in March.

Hundreds boarded buses on Saturday that were headed from the Al Waer neighbourhood to the rebel-controlled areas of Idlib, according to the UK-based Syrian Observatory for Human Rights (SOHR).

Al Waer, once known as the epicentre of the 2011 uprising against President Bashar al-Assad, has been under a government siege since 2013, triggering shortages of medicine and food.

The UN has not been able to deliver much-needed humanitarian aid to the area since September 2016.

The evacuation is the third phase of an agreement reached last year that saw hundreds of fighters and their families leave the area.

Under the evacuation deal, between 10,000 and 15,000 people will leave the neighbourhood in batches.

Homs Governor Talal al-Barazi has said it will take between six to eight weeks for the evacuation to be completed.

The Syrian government has increasingly tried to press besieged rebel areas to surrender and accept what it calls reconciliation agreements that involve fighters departing for northern Syria .

Damascus has said such deals are a good way to bring the country closer to peace after six years of conflict. The opposition and rights groups, however, have called the agreements a tactic of forcibly displacing people who oppose Assad after years of bombardment and siege.

“There is a deliberate strategy from the Syrian government in terms of retaking some of these areas is that they lay a siege on the area preventing all kinds of supplies from getting in, including food, medical supplies etc and then they indiscriminately attack these areas,” Ole Solvang, the deputy director of emergencies at Human Rights Watch, told Al Jazeera.

People who left Al Waer in the first convoy said that few preparations were made for their arrival to rebel-held parts of northern Syria and some said they wished they had never left in the first place.

Once completed, the Al Waer deal would mark the biggest evacuation during the war out of one Syrian district, which is home to about 40,000 civilians and more than 2,500 fighters, the SOHR said.

The deal follows other agreements that were never fully implemented between the government and rebel groups in Al Waer, which has been targeted heavily by air strikes in recent weeks.

The fifth round of talks on ending the conflit in Syria ended in Geneva on Friday without any significant progress. 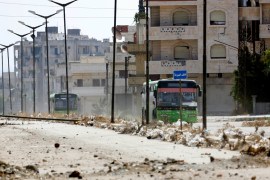 Fighters and their families moving out of Al Waer and into rebel-held parts of Aleppo under arrangement with government. 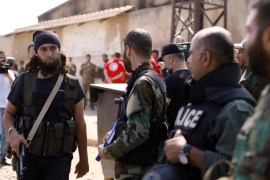 Last opposition area held by fighters in Homs city to be evacuated after heavy bombardment in recent weeks.