Asian leaders have played down tensions over the South China Sea in a carefully worded summit statement In Vientiane, Laos.

However, even before it was issued China voiced frustration on Thursday with countries outside the region “interfering” in tussles over the strategic waterway.

The lukewarm rebuke is a reflection of China’s diplomatic, economic and military clout within the 10-nation Association of Southeast Asian Nations (ASEAN), which is spearheading the summit with the United States, China and six other nations: Russia, India, Japan, South Korea, Australia and New Zealand.

Together they are attending the East Asia Summit in the Laotian capital.

The 10 ASEAN heads of state and the leaders of the six other countries together with US President Barack Obama and Chinese Premier Li Keqiang “reaffirmed the importance of maintaining peace, stability, security and freedom of navigation in and over-flight in the South China Sea”.

The draft is of a statement to be issued in Vientiane papers over the regional strains caused by competing claims to areas of the strategically important sea.

The statement makes no reference to a July ruling by a court in The Hague that declared illegal some of China’s artificial islands in the sea and invalidated its claims to almost the entire waterway.

“I recognise this raises tensions but I also look forward to discussing how we can constructively move forward together to lower tensions,” he said at a summit meeting.

Officials said that the talks on Wednesday between the ASEAN leaders and Li went smoothly.

However, in a statement later from China’s foreign ministry, Li was paraphrased as saying China was willing to work with Southeast Asian countries in “dispelling interference … and properly handling the South China Sea issue”.

He did not elaborate, but such wording is typically used by Chinese leaders to refer to not allowing countries from outside the region with no direct involvement in the dispute, like the US, from getting involved.

China claims much of the South China Sea, through which more than $5 trillion worth of trade moves each year. Taiwan and four ASEAN members – Vietnam, the Philippines, Malaysia and Brunei – also have claims, making it a hot spot of regional tension.

The other ASEAN nations are Cambodia, Indonesia, Laos, Myanmar, Singapore and Thailand.

China has over the past year alarmed other claimants, and outside powers such as the US and Japan, by re-claiming land on several disputed reefs through dredging, and building air fields and port facilities.

The Philippines released photographs and a map showing what it said was an increased number of Chinese vessels near the disputed Scarborough Shoal, which China seized after a standoff in 2012.

Its defence ministry expressed “grave concern” that Chinese boats were preparing to build structures at the triangle-shaped chain of reefs and rocks.

The Philippine move came after a dispute with the US, its former colonial power. The mood soured when new President Rodrigo Duterte insulted Obama using a vulgar term on Monday, prompting the cancellation of a meeting between them.

The two leaders made some steps towards clearing the air late on Wednesday, however, chatting briefly, and exchanging pleasantries as they prepared to take their seats at a leaders’ dinner.

The US has been a staunch ally of the Philippines, and China has repeatedly blamed the US for stirring up trouble in the South China Sea.

The US says it has no position on the territorial disputes but wants to ensure freedom of navigation. To press that point, it has conducted patrols near Chinese-held islands. 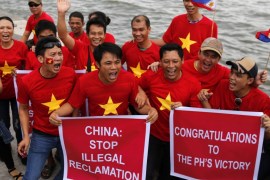 An international tribunal has ruled China has no ‘historic rights’ to resources in South China Sea. 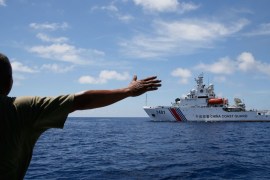