Philippine President Rodrigo Duterte has appeared to compare himself with Adolf Hitler, saying he would be “happy to slaughter” millions of drug addicts just like Nazi Germany killed three million Jews.

“Hitler massacred three million Jews … there’s three million drug addicts. There are. I’d be happy to slaughter them,” Duterte said early on Friday on his arrival in Davao City after a visit to Vietnam.

“If Germany had Hitler, the Philippines would have …,” he said, pausing and pointing to himself, according to AFP news agency.

While Hitler’s victims were innocent people, Duterte said his targets were “all criminals” and that getting rid of them would “finish the [drug] problem of my country and save the next generation from perdition”.

Historians say that six million Jews were killed by the Nazis under Hitler before and during World War II.

Duterte was elected in a May vote on the back of a promise to wage war on drugs and other crimes in the country of 100 million people.

He took office on June 30 and more than 3,500 people have been killed since then in police operations and attacks by unidentified assailants.

Duterte’s war on drugs has been heavily criticised by the United Nations, the European Union, the United States, the Catholic Church and human rights groups.

But he has hit back, often with abusive language, to the criticism.

When the European Parliament last week called on the Philippine government to put an end to the killings of drug suspects, Duterte replied by unleashing a series of expletives against the bloc.

“I have read the condemnation of the European Union. I’m telling them, ‘F**k you,'” Duterte said in a mix of Filipino and English, before describing the EU as hypocrites trying to “atone” for guilt over its members occupying other countries in the past.

Earlier this month, Duterte also directed profanities at UN Secretary-General Ban Ki-moon and US President Barack Obama, after they made similar comments about the mounting death toll in the Philippines.

Duterte later apologised for calling Obama “a son of a whore”. 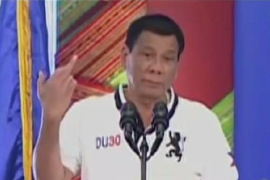 Angry at European denunciations over his bloody drug crackdown, Philippine president tells the Union where to go. 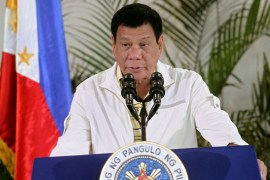 Philippine president expressed “regret” after calling US leader “son of a whore” ahead of planned talks.