Egyptian authorities at the notorious al-Aqrab (Scorpion) prison in Cairo have been abusing inmates in ways that may have led to their death, a new Human Rights Watch report said.

The 80-page report, released on Wednesday, is based on interviews with 20 of the prisoners’ relatives, lawyers, a former prisoner and other medical files and photographs.

It is estimated that thousands are being held in the prison, mainly political prisoners and critics of the regime.

“Staff at Scorpion Prison beat inmates severely, isolate them in cramped ‘discipline’ cells, cut off access to families and lawyers, and interfere with medical treatment,” the report says, adding testimonies of “cruel and inhuman treatment by officers of Egypt’s Interior Ministry that probably amounts to torture in some cases and violates basic international norms for the treatment of prisoners”.

Inmates of al-Aqrab, which has been dubbed Egypt’s Guantanamo by activists, are reportedly held in cells without beds, access to basic hygiene and adequate medical treatment.

At least six inmates have died in captivity according to the report, three of whom died after being refused treatment for diseases such as cancer and diabetes, according to their families.

Essam Derbala, one of the prisoners who was a member of the Islamic Group (al-Gama’a al-Islamiyya), died after authorities refused to provide him with his prescription diabetes medicine despite appearing in court shaking, semi-conscious and unable to control his bladder, according to Derbala’s brother and lawyer.

The conditions at al-Aqrab, also known as Tora prison, have been found to be “more systematic and severe” than other prisons “because it is the site where political opponents of the government are concentrated,” Joe Stork, HRW’s deputy Middle East and North Africa director, told Al Jazeera.

“It seems reasonable to assume that this abuse is systematic – which does not necessarily mean that every prisoner gets the same treatment, but that a great number do,” Stork told Al Jazeera.

HRW said it had sent the Egyptian government a letter detailing the reported abuses a month ago but had not yet received a response.

Mohamed Soltan, an Egyptian-American human rights advocate who spent close to two years in Egyptian prisons, said the findings of the HRW report do not come as a surprise.

“I can attest to a little part of your soul dying every day you wake up to that darkness.”

In March 2016, at least 32 prisoners held at al-Aqrab went on a mass hunger strike to highlight the alleged abuses. Those being held there reportedly include the Muslim Brotherhood movement’s top leadership, alleged members of the Islamic State of Iraq and the Levant (ISIL) group and various critics of President Abdel Fattah el-Sisi’s government, including journalists and doctors.

Sisi, who led the takeover of Mohamed Morsi‘s Muslim Brotherhood government in July 2013, has been accused of sanctioning the arrest of thousands of activists and members affiliated with the Muslim Brotherhood since he became president in June 2014.

Between Morsi’s overthrow in July 2013 and May 2014, Egyptian authorities arrested or charged at least 41,000 people, according to HRW. “The Egyptian authorities have engaged in one of the widest arrest campaigns in the country’s modern history, targeting a broad spectrum of political opponents,” the report said.

“I have even come across folk who were simply in the wrong place at the wrong time, but the common factor among the thousands of prisoners was the basic principles of the revolution – freedom, bread, and social justice,” said Soltan, who was imprisoned between August 2013 and May 2015.

The number of prisons in the country has also reportedly increased since the overthrow of the Muslim Brotherhood, according to a recent study by the Arab Network for Human Rights Information.

Activists and analysts say that while such reported oppression existed even during Hosni Mubarak’s rule (1981-2011), the serious deterioration began when Sisi took over.

“The greatest atrocities began right at the time when he [Sisi] came to power. This state sponsored-violence started with the greatest number of arrests in the summer of 2013, and they have continued on that path,” Mohamed Elmasry, a political and media analyst, told Al Jazeera.

“They have been working very hard in the past three years to eliminate all forms of dissent,” Elmasry added.

While there have been numerous reports over the past three years calling on Egypt to alter its conduct towards critics of the regime, activists are not hopeful of any change occurring any time soon.

“Egypt will not only continue to ignore calls to improve its human rights record in general and prison conditions in particular, but it will continue to escalate in its repression so long as it continues to get away with these violations, with no notable consequences from the international community,” said Soltan.

Still, HRW believes it is in Egypt’s interest to change course, as the officials directly responsible for overseeing or carrying out such abuses “may be held criminally liable for offences that violate Egyptian as well as international law,” according to Stork. 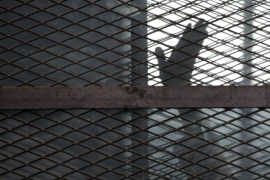 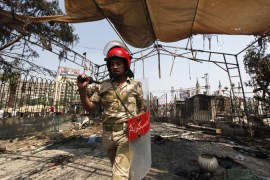