Leaders of Zimbabwean war veterans have boycotted a speech by President Robert Mugabe to honour fighters of the country’s independence war, widening a rift with Africa’s oldest leader.

The veterans, who boycotted Monday’s speech, have called on Mugabe to step down.

The ZNLWVA executive was absent from National Heroes Day celebrations in the capital to honour living and dead fighters of the 1970s liberation war against white minority rule.

This is the first time leaders of the group have failed to attend the celebrations since ZNLWVA was formed in 1990.

The group has anchored Mugabe’s election campaigns since 2000, when the first major opposition to the president emerged with the formation in 1999 of the main opposition party Movement For Democratic Change led by Morgan Tsvangirai.

ZNLWVA secretary-general Victor Matemadanda said his group had boycotted Monday’s event because it had lost its meaning.

“We said as an executive we have no reason to attend because it [National Heroes Day] is not intended to achieve the true goal to honour the war veterans,” Matemadanda told Reuters.

“We said because we are being persecuted continuously, there is no reason why we should go there. In fact if you go there, you will never know what they will think, maybe they will think of arresting us or other comrades who have not been arrested.”

Mugabe’s government has arrested and charged war veterans’ leaders in a crackdown against his formed allies.

In his 50-minute speech, Mugabe did not mention the war veterans, but instead accused activist pastor Evan Mawarire of calling for violent anti-government protests.

Mawarire’s #ThisFlag movement last month led a protest over delayed salaries for public sector employees that closed businesses, government offices, schools and hospitals – the most significant popular defiance of the long-ruling Mugabe in a decade.

“If protests are allowed, let them be peaceful, not to be like the ones advocated by Mawarire,” Mugabe said.

Zimbabwe is struggling to pay salaries to soldiers, police and other public workers, which could stoke political tensions in a nation plagued by drought, a drop in mineral prices and chronic cash shortages – all factors behind unrest against Mugabe, the only leader independent Zimbabwe has known.

Mugabe’s government is drafting a Computer Crime and Cyber Crime Bill, which will allow authorities to seize phones and laptops. This is seen as an effort to curb the use of social media to organise anti-government demonstrations.

Information Communication Technology Minister Supa Mandiwanzira defended the bill, saying it had been planned a long time ago and was similar to legislation in other countries. 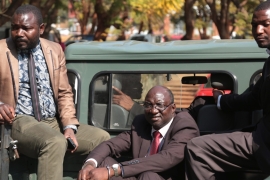 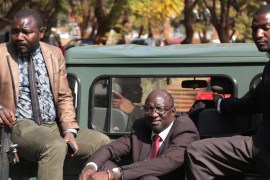 Police in Zimbabwe have arrested several senior war veterans who called for President Robert Mugabe to step down. 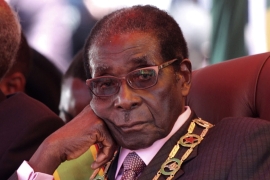