At least 34,651 cases of rape were reported across India last year, statistics released by the country’s National Crime Records Bureau (NCRB) have revealed.

The figures, released on Tuesday, showed that victims ranged from female children younger than six years old to women over 60 years, with those aged between 18 and 30 reporting the largest number of rape attacks – totalling almost 17,000.

There were also 4,437 cases of reported attempted rape last year.

But rights workers say that the figures are likely not an accurate representation of the scale of the problem, as stigma surrounding sex crimes means many attacks are not reported.

Kavita Krishnan, secretary of the All India Progressive Women’s Association, warned that the figures should be analysed with caution.

“Rape is highly under-reported,” she said, but added that there were cases where “consensual elopement is being reported as rape by the parents of the girl.

“The heart of the issue is structures in India that continue to restrict women’s autonomy, and especially sexual autonomy, often justified in the name of culture.”

Sexual violence against women in India rose to the forefront internationally after the December 2012 death of a young woman who was gang-raped on a bus in New Delhi.

The brutal attack triggered domestic and global condemnation and widespread protests across India over the high levels of violence against Indian women and children.

Sexual harassment and child abuse is definitely a cause for concern in India, said Shreya Jani, who runs a peace education NGO in New Delhi.

In the past, reporting and discussing such crimes was considered “taboo”, Jani told Al Jazerra.

“It’s heartening to see that now more women are reporting these crimes and speaking up. As Indian women, we are a paradox of strength and silence. I am glad the silence is being broken by many now,” she said.

Still, Jani said she feared walking on deserted streets at “any time of the day or night”.

She also follows personal security precautions, including making sure someone always knows her movements, and her mobile phone is always charged.

In June, the Indian parliament passed a law to install panic buttons and other emergency devices on buses to inform the police in the case of potential sexual violence.

The country also issued another regulation requiring all mobile phones sold in the country from 2017 to include a panic button. From 2018, phones are set to include GPS navigation systems.

The total number of crimes against women, including rape, recorded by the crime bureau stood at 327,394, and related to sexual harassment, attempts to undress, importation of girls from foreign countries, cruelty by husbands or other relatives, kidnapping and abductions, among others. 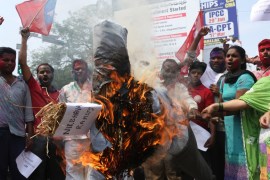 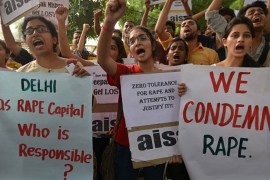