Italy will set up a shelter to host as many as 300 asylum seekers stranded near the Swiss border, after Switzerland cracked down on crossings, forcing hundreds to sleep on the ground in a city park, officials said Wednesday.

In mid-July, Switzerland began strict controls on people arriving by train from Como, an Italian city on Lake Como. Since then, Switzerland has turned away two thirds of those who tried to enter the country, compared with one in seven in June of this year.

Starting in mid-September, a city-owned car park near the local cemetery will house 50 pre-fabricated modules and showers, bathrooms and a small health clinic to accommodate as many as 300 people temporarily, prefect Bruno Corda said in a news conference broadcast on television.

Asylum seekers will be provided with legal aid on Italy’s asylum process at the camp, Corda said. Under European Union law, people who arrive in Italy by boat from North Africa must seek asylum there because it is the first European country they reached.

“I’m confident that the people who cannot go to Switzerland will want return to a system of legality,” Corda said.

But many migrants do not want to stay in Italy, often because they have relatives or friends already living in other countries.

Non-governmental and human rights groups such as Amnesty International have called for clarifications from Switzerland over refugees’ claims that they were denied a chance to speak to border authorities and that requests to seek Swiss asylum went unheeded.

About 100,000 people, mostly from Africa, have landed on Italian shores this year, and more than 140,000 asylum seekers are already living in the nation’s shelters. In 2014 and 2015, more than 320,000 reached Italy by boat, the majority of whom have moved on to other countries. 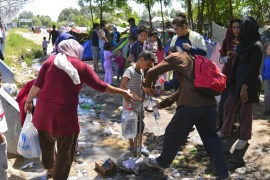 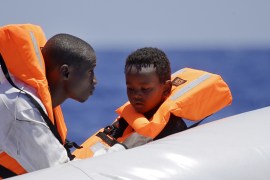