The European Parliament has urged Myanmar to end what it termed as the “brutal repression” and “systematic persecution” against the country’s Rohingya Muslim minority.

In a resolution on Thursday, European politicians expressed “deep concern” about the stateless ethno-religious group, which they said is “one of the world’s most persecuted minorities”.

The parliament said Myanmar must “as a matter of urgency ensure free and unimpeded access” for the United Nations and rights groups in Rakhine State, where some 120,000 Rohingya remain in more than 80 internal displacement camp.

Myanmar should “condemn unequivocally all incitement to racial or religious hatred and implement specific measures and policies to prevent direct and indirect discrimination against the Rohingya in the future”.

In recent weeks, violence has erupted in the region, with reported attacks on mosques and individual Rohingya.

There are an estimated one million Rohingya in Myanmar.

They are considered stateless, according to the 1982 Burmese Citizenship Law, and unwanted by neighbouring countries.

Myanmar leader Aung San Suu Kyi insisted in May that her new government was determined to address deep hatreds in Rakhine State, where tens of thousands of Rohingya are confined to squalid camps after waves of deadly unrest with local Buddhists in 2012.

Aung San Suu Kyi, however, has refused to use the term “Rohingya”, which she said only risks inflaming tensions.

She and her administration have been widely criticised for not speaking up sufficiently for the group, which ultra-nationalist Buddhist group call “Bengalis”.

The UN High Commissioner for Human Rights has also warned that the Rohinya may be victims of crimes against humanity.

Suu Kyi is a winner of the Sakharov Prize for freedom of thought, which the EU awarded to her in 1990 and which she picked up only three years ago following 15 years of house arrest. 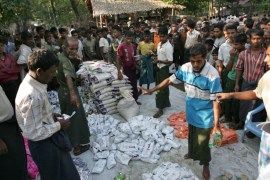 Night-time curfew was imposed in Rakhine state in June 2012 after violent clashes killed more than 200 people.