A convoy of ambulances, most of them carrying coffins, arrived on Thursday morning at the port town nearest to the Nusa Kambangan prison island, where the mostly foreign drug convicts will be executed by firing squads.

Al Jazeera’s Step Vaessen, reporting from Jakarta, said the execution was “imminent”, and that the prisoners have been taken to the execution site.

“All signs are there,” she said. “For the very last time, relatives of 14 prisoners have traveled to the prison island, where the executions are going to take place tonight.”

Officials began tightening security at the prison several days ago, with more than 1,000 police sent to Cilacap, the port town, and the island.

The European Union and the UN High Commissioner for Human Rights called on Indonesia to impose an immediate moratorium on executions and the Indian and Pakistani governments said they were making urgent efforts to save two nationals among the condemned.

Indonesia has not released an official list of those to be executed but the country’s attorney general said 14 people would be put to death.

Community Legal Aid Institute, which is involved in some of the death-row cases, has given names for four Indonesians, six Nigerians, two Zimbabweans, one Indian and one Pakistani.

Lawyers and rights groups have raised serious doubts about the legitimacy of the convictions in several of the drug cases, including that of Pakistani Zulfikar Ali, Indonesian Merri Utami and Nigerian Humphrey Jefferson.

About 10 women protesting in Cilacap against Utami’s death sentence were taken away in a police van on Thursday.

Muhammad Rum, a spokesman for Indonesia’s attorney general, said the executions are the “implementation of our positive laws” and will not be delayed or stopped.

All the cases have gone through a long legal process, including appeals, he said.

“They all have been given chances at all stages.”

The foreign ministry also defended the use of capital punishment and the legal process.

In Cilacap, the sister-in-law of Michael Titus, a Nigerian sentenced to death, said his Indonesian wife was returning to Indonesia from West Africa in the hope she would be able to see him a final time.

“We will keep fighting to seek justice for our family,” said the relative, Nila, who used one name. “Michael is not alone. He has a wife, kids.”

From Pakistan, a sister of Ali made an emotional appeal to the Indonesian authorities to review his case.

Family members said the Indonesian government had arranged a final meeting between Ali and his wife and mother, who traveled to Indonesia.

“My brother is not a drug smuggler. I swear he is innocent,” said Sajida Bibi.

“I want to see my brother alive,” she sobbed. “Don’t send his body to us.”

It said his case has not been properly reviewed by Indonesian authorities despite an internal government investigation which cast doubt on the conviction for drug trafficking.

The Indonesian government says the death penalty is necessary for drug crimes because the country is facing a drug epidemic, particularly affecting young people. But critics argue that capital punishment is not an effective deterrent and some have also questioned the accuracy of the government’s drug abuse statistics.

It would be the third set of executions under President Joko “Jokowi” Widodo, who campaigned on promises to improve human rights. His two-year-old administration will have executed more people than were executed in the previous decade. Fourteen were put to death last year.

Worldwide, China is believed to be the country with the highest number of executions but it does not release figures. Amnesty International estimates several thousand people are executed in China each year.

Of the more than 1,600 publicly announced executions last year, Amnesty says nearly 90 percent of them were in three countries: Saudi Arabia, Pakistan and Iran. 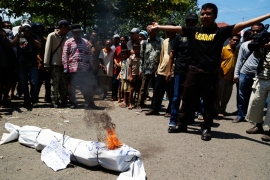 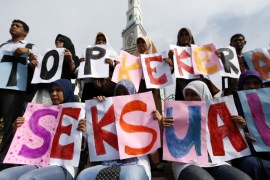 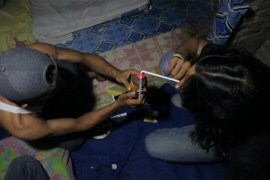