Vucic went to the polls two years early, saying he wanted a clear mandate from Serbia’s 6.7 million voters for reforms to keep European Union membership negotiations on track for completion by 2019.

His Progressive Party has split the country by pushing for Serbia’s inclusion in the EU.

The far-right Radical Party (SRS) made significant gains in the election, with support from those who favour closer ties with Russia.

The party was projected to win nearly eight percent of the votes, becoming the third largest party in parliament.

SRS leader Vojislav Seselj, whom the United Nations war crimes tribunal cleared of accusations related to the Yugoslav wars less than a month ago, was once a political partner of the incumbent prime minister but is now his foe.

Vucic was once a member of the SRS to protest against what he believed was the West’s victimisation of the Serbs during the NATO bombing campaign in the 1990s.

‘Continue on its European path’

After Sunday’s election Vucic claimed that his party won 158 of the 250 seats in parliament.

“Serbia will continue on its European path and we’ll try to accelerate it,” Vucic told supporters gathered in the SNS headquarters. “There is no compromising with that.”

However, the incumbent prime minister also stressed that Belgrade would still maintain a friendship with
Russia, its traditional Orthodox ally and supporter. Serbia has been walking a tightrope between the West and Moscow since the conflict between the two sides escalated over Ukraine.

Analysts said that while Vucic’s victory is confirmed, the number of seats claimed by each party may yet swing significantly.

Three small parties hovered around the 5 percent mark, the minimum they must win to claim seats. The more parties to enter the legislature, the fewer votes are left over for redistribution, which gives the SNS a higher number of seats in the parliament.

The Socialist Party (SPS), the junior partner in the outgoing coalition and the party of Foreign Minister Ivica Dacic, came in second, projected to take nearly 12 percent of the votes.

Once the party of Slobodan Milosevic, the SPS is now also following a pro-EU agenda just like its coalition partner. It is unclear whether SNS and SPS will renew their alliance but analysts expect Vucic to use an alliance with SPS to broaden his base.

SRS leader Seselj immediately offered a coalition “to any party willing to renounce EU ambitions and turn to Russia”.

The party may complicate EU membership talks by resisting concessions, such as ending Serbia’s constitutional claim to sovereignty over Kosovo.

But, Vucic has previously said that he would not compromise with right-wing parties. After casting his vote on Sunday, he said: “I’m almost certain that we’ll carry on our EU integration process”. 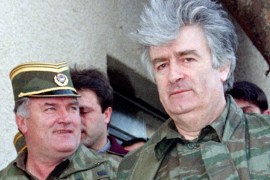 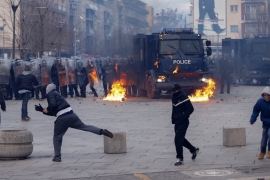