Syrian state TV has said that the army recaptured major parts of the historic and strategic city of Palmyra as battles rage between Syrian army troops and the Islamic State of Iraq and the Levant (ISIL) fighters.

Syria’s state news agency, SANA, reported on Friday that the army, backed by forces loyal to the government, has recaptured the Syriatel hill and the Palmyra castle after heavy clashes with ISIL.

“The army units combed the hill after destroying the last hideouts of ISIS terrorist organisation and dismantled the explosive devices left behind by its members,” SANA reported on their website.

Inside Story: Why is ISIL targeting cultural heritage?

“I welcome the liberation of the Palmyra archeological site, martyr city inscribed on the UNESCO world heritage list, which carries the memory of the Syrian people, and the values of cultural diversity, tolerance and openness that have made this region a cradle of civilization,” Bokova said on Thursday.

The Syrian advance comes amid a government offensive to capture Palmyra that began earlier this month with support from Russian fighter jets.

However, Nasser of the Palmyra Media Centre, told Al Jazeera on Friday that the reports are untrue and heavy clashes are still taking place.

“The city of Palmyra is still under ISIL control, unlike what Syrian state media are reporting. Ongoing clashes are still taking place between ISIL fighters and the Syrian army.

Read more: The future of ancient sites in the Middle East

A Russian commando who was calling in coordinates for air strikes was killed, said an unidentified Russian military spokesman from the Hmeymim base in Latakia.

“The soldier died heroically, distracting fire on to himself after being discovered by terrorists and surrounded by them,” he was quoted as saying in Russian media on Thursday.

The UK-based Syrian Observatory for Human Rights said that the Syrian army, backed by air strikes, has captured the Palmyra castle and that fighting was still ongoing outside the city.

ISIL captured the city, also known as Tadmur, in May last year and began a campaign of destroying some ancient sites and using others to stage mass executions.

Syria is in the midst of cessation of hostilities between government forces and opposition rebel factions, which has significantly reduced violence in the country.

The agreement excludes al-Nusra Front and ISIL, which are considered “terrorist” groups by the Syrian government.

The uprising that turned into a civil war in Syria began five years ago. More than 250,000 people have since been killed, according to the UN, and millions have fled to neighbouring countries and Europe.

ISIL began capturing large swaths of territory in Syria in 2013 after wrestling territory off rebel groups and later through its own offensives against both the opposition and government.

The group has held on to most its gains but has lost areas in northern Syria to Kurdish groups backed by US air strikes and Syrian forces backed by Russia.

Syria state TV says the army recaptured the Syriatel hill near Palmyra’s castle and is closer to retaking the city. 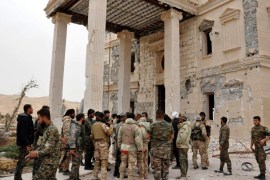 Satellite images show little is left of Temple of Bel after Syria’s ISIL blows up main structure of the ancient ruins. 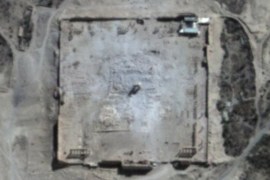 ISIL blows up part of main temple in Syria’s Palmyra

More than 30 tonnes of explosives used to destroy part of Bel temple, one of ancient city’s most significant structures. 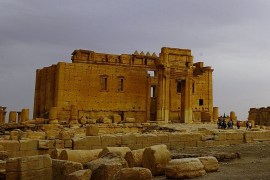