Bolivia’s water shortages have been exacerbated by a boom in mining projects, according to environmental and land rights campaigners.

The country is currently in the grip of a drought, which is said to be the worst in 25 years.

In November, the country declared a state of emergency as the water situation worsened.

Although the drought has reduced the amount of water available, environmentalists are claiming the problems have been greatly enhanced by the mining companies.

According to Reuters, nearly 100,000 cubic metres of water are used in Bolivia’s mining industry every day. This is the same amount of water which is used in the entirety of the capital, La Paz, in two days.

The drought has affected at least 170,000 families across the country, and coincides with a rise in the price of minerals.

According to Hector Cordova, a mine engineer and analyst for Bolivia’s Jubilee Foundation, the mining companies would continue to put an increase in profits before drought-related consequences.

The country’s mineral production “will increase in volume to take advantage of the good prices, but undoubtedly greater production translates to more water use … When production has increased, more water has been used. There’s no alternative,” he said.

Some of the smaller companies have been forced to stop production due to the lack of water.

Some of the bigger companies, however, could afford to make large investments in order to extract water from beneath the ground, according to Cordova. These companies have been able to increase production despite the drought.

The unregulated extraction of water from the ground is a cause for concern.

Consistently, year after year, more water has been extracted from groundwater than has been replenished. Studies have shown that the reserves of groundwater in Bolivia are now below 50 percent.

According to Milton Perez, an engineer at Oruro Technical University, Bolivia’s decline in groundwater is part of a global trend.

“Globally, we have 37 very important bodies of groundwater that are taxed for direct human consumption. Of these 37, 22 bodies of water, most of them on the African continent and a few in the north of America, have dried up completely.”

Alarmingly, the current drought in Bolivia comes on the back of one of the most powerful El Nino events on record.

El Nino, the slight warming of the surface of the Pacific Ocean, usually causes an increase in rain across Bolivia. The recent El Nino event triggered major flooding and landslides in the region during February and March.

By the end of November, La Paz had received 438.8mm of rain, only nine percent less than the average.

The majority of the rain in La Paz falls in December, January and February, but there are concerns that these rains will be below average.

Currently, there are weak La Nina conditions in the Pacific, characterized by a cooling of the surface waters, which is likely to extend the drought into 2017. 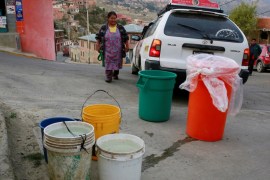 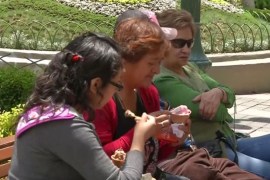 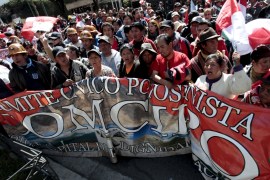