Prosecutors in the United States have vowed to retry a South Carolina police officer for murder over shooting dead of an unarmed black man after a hung jury resulted in a mistrial.

Circuit Judge Clifton Newman announced the mistrial after a jury said on Monday that it was unable to reach a unanimous agreement on a verdict for Michael Slager, the police officer who shot and killed Walter Scott.

Slager was standing trial for killing 50-year-old Scott in North Charleston after stopping him for having a broken taillight in April 2015.

“While I cannot overstate our disappointment that this case was not resolved, I commend those who sacrificed so much time, energy and effort to serve on this jury,” Wilson said in a statement.

“We will try Michael Slager again.”

‘Injustice will not prevail’

Scott’s mother Judy said outside court that she knew justice would be served. “God is my strength and I know without a doubt that he is a just God and injustice will not prevail,” she said.

The judge had told jurors they could also consider a lesser charge of voluntary manslaughter.

Scott’s murder in April 2015 was captured on a mobile phone video taken by a bystander, which showed him being shot in the back.

READ MORE: Black Lives Matter – The backlash against US police

The footage, which was widely shown in the media and online, shocked the country.

After the video went public, Slager was fired by the police department and charged with murder. Scott’s family called for peace in the North Charleston community.

Their calls for calm are believed to have helped prevent the kind of violence that erupted elsewhere when black men were killed in encounters with police.

The video renewed debate over how blacks are treated by white police officers. There have been similar debates over race and policing in places from New York to Ferguson, Missouri and from Tulsa, Oklahoma to North Carolina.

Racism was never made a major issue at trial, even though Slager is white and Scott was black.

On Monday, a note said a majority of the jurors on the panel of 11 white people and one black person were still undecided. They would have needed to reach a unanimous decision in order to convict the officer.

The jury told Circuit Judge Clifton Newman on two separate occasions on Friday they were deadlocked but then the jury foreman said he thought the jurors could reach a verdict.

The defence claimed that the two men wrestled on the ground, that Scott got control of Slager’s stun gun and then pointed the weapon at the 34-year-old officer before the shooting.

North Charleston, which borders Charleston, has a history of strained relations between the city’s police department and its large black community.

Scott’s death had set off protests in the area, but on Monday, his brother Anthony urged would-be protesters to remain peaceful.

US police have killed at least 990 people so far this year, according to The Guardian’s The Counted database.

Black Americans make up around 13 percent of the US population, and account for nearly 24 percent of those killed by police. 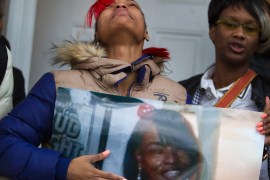 The Lives of Black Women

Fault Lines explores the lesser-known stories of black women who have fallen victim to police violence in the US. 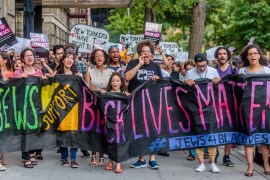 A new generation of civil rights uprising has now picked up where the Civil Rights Movement of the 1960s left off.