Palestinians and Israeli critics have called it a land grab that would further distance prospects for a two-state solution to the Israeli-Palestinian conflict.

The draft is the fruit of a compromise between Netanyahu and the bill’s main backer, Education Minister Naftali Bennett, who has called it the start of Israel’s eventual annexation of most of the West Bank.

Agreement between the two is expected to assure the draft bill’s eventual passage through the Knesset, Israel’s parliament.

Bennett, from the religious nationalist Jewish Home party, is among members of Netanyahu’s coalition who have made no secret of opposing a Palestinian state.

Netanyahu says that he still backs a two-state solution to the decades-old conflict.

Opposition leader Isaac Herzog, who leads the Labour Party, denounced the law by equating its adoption to a “national suicide”.

The bill has severely tested Netanyahu’s coalition, seen as the most right-wing in Israeli history. A previous version was given preliminary approval last month.

In a stormy session on Monday, Israel’s Knesset voted 60-49 in favour of the revised bill. It must pass three more votes at unspecified future dates before becoming law.

Israel captured the West Bank during the 1967 Middle East war. In the five decades since, it has built about 120 settlements, which the international community has deemed illegal and an obstacle to peace with the Palestinians.

In addition to the formal, government-recognised and supported settlements, settlers have established more than 100 outposts across the occupied West Bank.

A recent report on the bill by leading Israeli human rights organisation B’Tselem said: “Dispossession of Palestinians was never a matter contingent on this legislation. It has been integral to the settlement enterprise from its very inception and is one of the most consistent trends in Israeli policy over the decades”.

International rights group Peace Now called the proposed bill “grand law robbery”, adding that its passage would “not only lead to a moral deterioration by approving the theft of private lands, but will also be a devastating blow to the two-state solution as it will allow the establishment and expansion of new settlements, far from the Green Line”.

Speaking on Sunday in Washington at a think-tank conference, US Secretary of State John Kerry pushed Israel to rein in settlement construction on West Bank land that Palestinians want as part of a future state.

“There will be no advance and separate peace with the Arab world without the Palestinian process and Palestinian peace,” Kerry said.

The international community considers all settlements in Israeli-annexed East Jerusalem and the occupied West Bank to be illegal, whether they are authorised by the government or not.

The Israeli government differentiates between settlements it has officially approved and those it has not.

Before Monday’s vote, Netanyahu and Bennett agreed on a vote on the draft bill and the displacement of some 40 families from the outpost settlement of Amona, near Ramallah, which was under a court order to be evacuated by December 25.

Some members of Netanyahu’s coalition had previously said that they could not support the bill if Amona remained part of it because of the court ruling against it.

The agreement will instead see Amona residents temporarily moved to nearby land that Israeli officials describe as abandoned, until a permanent solution is found.

Rights groups say that land is owned by Palestinians and that the move would violate international law.

Amona residents would be able to “stay on the hill where they are settled” but “move a few tens of metres”, Netanyahu told his Likud parliamentary group.

“They would be able to stay there as a community, and this is very important news.”

The bill’s progress has alarmed many in the international community.

The UN envoy for the Middle East peace process, Nickolay Mladenov, said the legislation “has the objective of protecting illegal settlements built on private Palestinian property in the West Bank.

“It is a very worrying initiative. I encourage Israeli legislators to reconsider such a move that would have far-reaching legal consequences across the occupied West Bank.”

Proposed legislation allowing confiscation of private land and silencing of mosque “noise” could lead to “catastrophe”. 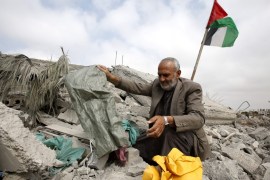 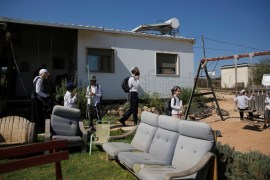 State department spokeswoman said the US is “deeply concerned” over proposed bill to retroactively legalise outposts. 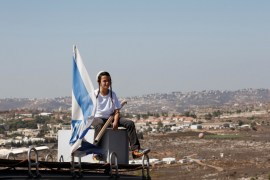