An average of three Canadian soldiers were sexually assaulted or harassed each day over the past year, usually by a superior, according to a survey released on Monday.

In total, about 960 soldiers reported to the government statistical agency being raped, grabbed, kissed, fondled, or subjected to unwanted advances after being drugged or manipulated.

The figures show endemic sexual misconduct within the ranks persisting more than a year after a scathing report accused the military of being “hostile” to women and homosexuals.

It also suggests that measures to combat the problem have been ineffective.

More than half of the Canadian army participated in the survey.

Vance noted that 30 officers had already been stripped of their command or supervisory role for ignoring his order last year to all troops to stop such behaviour.

“I am more motivated than ever to eliminate this behaviour and the perpetrators from our ranks,” he said.

Although more men (570) than women (380) reported being assaulted in the last year, women were four times more likely to be victims, according to Statistics Canada.

The most common form of sexual misconduct was unwanted sexual touching (840).

Other forms included sexual attacks (150), and sexual activities to which the victim was unable to consent because they were drugged, intoxicated or manipulated (120).

Only one in four victims reported incidents. Many of the others cited a fear of negative consequences or a lack of trust in the complaint process. 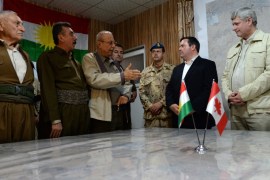 Why are Canadian troops in Iraq wearing Kurdish flag?