Ethnic Albanian protesters have clashed with police in Kosovo after its government agreed to an EU-brokered deal that gives ethnic Serbs in the territory greater local powers.

Several thousand demonstrators were involved in the clashes in Pristina on Saturday over the agreement, which many Kosovans fear will see neighbouring Serbia assert more influence over the country.

The deal could also open the way for Serbians living in Kosovo to receive financing from Belgrade.

Al Jazeera’s Stefan Goranovic said tension between the government and those opposed to the deal had been building up for over the past few months.

“They (protesters) are thinking that the Serbian state will be back through the back door in Kosovo…they fear that with the finance from Belgrade, local authorities will be more connected to Serbia,” he said.

Last month, opposition politicians threw tear gas into the parliamentary chambers in protest at the agreement.

Kosovo, which has an ethnic Albanian majority, declared independence from Serbia in 2008 with backing from Western states, while Russia and dozens of other states do not recognise its independence. 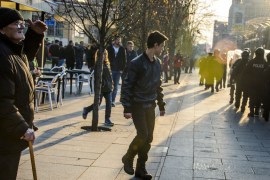 Voices from Kosovo: We want ‘discussion, not violence’ 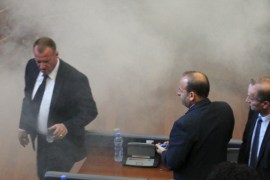 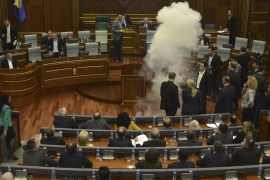