Forming between the islands of Tuvalu and Samoa on Thursday, Ula first passed over Tonga on New Year’s Day.

The Tonga Meteorological Service reported winds of up to 150 kilometres an hour, and rainfall in excess of 100mm.

Widespread damage was reported, with roofs ripped from houses, and power and telephone lines toppled by the strong winds.

On the plus side, Ula’s rain is likely to have eased the ongoing El Nino-induced drought, which has left more than 60,000 people relying on water deliveries. This is usually the wettest period of the year with monthly rainfall averages of around 400mm.

After leaving Tonga, Ula maintained its strength on its 800km journey to Fiji.

The volcanic island of Ono-I-Lau, which lies half way between Tonga and Fiji, reported 75mm of rain. Totals of 30 to 40mm of rain were reported on Fiji. Again, the rainfall was welcomed to offset the ongoing drought which has affected 30,000 people.

Winds of 150km/h were recorded in the Lau group of islands in Fiji’s eastern division, and people were evacuated from their homes on the islands of Vava’u and Ha’apai as a state of emergency was declared.

Although Ula is moving southwestwards, away from Fiji, it could curve back towards the island in the coming days. While the winds will ease and no longer be such a threat, rainfall is likely to continue across Viti Levu, Fiji’s largest island, on which the Suva, the capital, lies. The city could feel the benefit of another 30 to 40mm of rain in the next week. 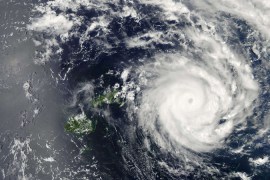