New Australian Prime Minister Malcolm Turnbull has promised to focus on stability and improving a faltering economy as the public woke up to their fourth leader in two years.

Turnbull was sworn in as Australia’s 29th prime minister on Tuesday after a surprise ballot of his conservative Liberal Party colleagues voted 54-44 on Monday night to replace Tony Abbott only two years after he was elected.

Turnbull’s elevation has cemented a culture of disposable leaders as the new norm in Australian politics since the 11-year tenure of Prime Minister John Howard ended in 2007.

“There’s been a change of prime minister, but we are a very, very strong government, a very strong country with a great potential and we will realise that potential working very hard together,” Turnbull told reporters as he left his Canberra apartment on Tuesday morning.

“This is a turn of events I did not expect, I have to tell you, but it’s one that I’m privileged to undertake and one that I’m certainly up to,” he added.

Shortly before Turnbull was sworn in, Abbott spoke for the first time since his sudden ouster, warning that the persistent volatility in Australia’s government could hurt the nation’s standing on the global stage.

“Australia has a role to play in the struggles of the wider world: the cauldron of the Middle East and security in the South China Sea and elsewhere,” Abbott told reporters.

“I fear that none of this will be helped if the leadership instability that’s plagued other countries continues to taint us.”

Abbott was deposed barely two years into his three-year term after months of opinion polls that showed his popularity with the public near rock bottom as Australia’s $1.5 trillion economy struggles to cope with the end of a once-in-a-century mining boom.

Turnbull had previously been unpalatable to his party’s right wing because of his progressive views on climate change, same-sex marriage and making Australia a republic.

Turnbull’s ascension is seen by many political analysts as restoring stability because he presents a more formidable foe for the opposition Labor Party at elections due in about a year. 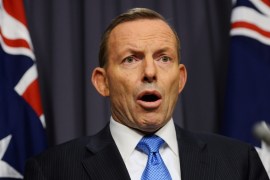 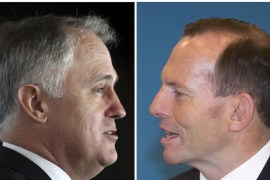 Australia to get new PM after Abbott toppled

Tony Abbott to step aside as prime minister after losing leadership challenge to Malcolm Turnbull. 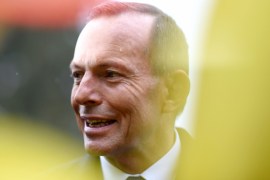