The most powerful storm anywhere on the planet, so far this year, is heading across the Pacific Ocean towards the island of Taiwan.

Soudelor attained ‘Super’ status on Tuesday with sustained winds of more than 240km/h. Its energy has come from the very warm surface waters of the western Pacific, where sea surface temperatures (SSTs) are around 31C. (SSTs in excess of 26C are generally required for cyclone formation.)

The exceptionally warm surface waters are consistent with the current El Nino, and this explains why 2015 has been such an active year for Pacific cyclones.

Soudelor is the sixth Category 5 cyclone (on the Saffir-Simpson scale) of 2015. Typically, we would expect to see around five such systems, during the entire year. This raises the possibility of breaking the record of 12 set back in 1997, another major El Nino year.

Taiwan has every reason to fear a major cyclone. The country experiences an average of more than three typhoons every year. Some of them have proved deadly.

The worst in recent years was Typhoon Morakot which, although only a Category 1 storm, was responsible for the deaths of more than 700 people.

The huge death toll was the result of flooding and landslides after the slow-moving Morakot dropped as much as 2,300mm in the space of 48 hours.

Fortunately, Soudelor is expected to make brisk progress across the island, thereby keeping the rainfall totals much lower.

Current forecasts suggest rainfall of 200 to 500mm. Nevertheless, with a high population density and a mountainous terrain, loss of life is highly likely.

Current timings suggest Soudelor will make landfall during Friday. The centre of the typhoon will be directly over the island at 22:00 GMT, with sustained winds of 215km/h, making it a Category 4 storm.

As it passes across the Taiwan Strait, Soudelor will weaken considerably and it is expected to strike mainland China near Quanzhou as a Category 1 storm.

Heavy rain and the resultant flooding will be the main problems over the weekend. The storm will continue to weakens as it heads northwestwards towards the Yangtze River valley. 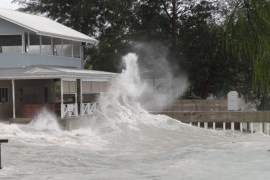 The Philippines, Micronesia, the Marshall Islands and Solomon Islands contend with the effects of tropical storms.