Recognised internationally as Libya’s prime minister, Abdullah al-Thinni heads one of the two parallel governments fighting for control of the country. Thinni’s government operates from Tobruk, a port city in Libya’s east, after being driven into exile following elections in June 2014.

The schism in Libya’s current governing system can be traced back to the ousting of former leader Muammar Gaddafi, who retained his grasp on Libya for four decades until the 2011 uprising. The General National Congress (GNC) subsequently took power during the transition in Libya.

But optimism soon soured as the path to new governance became warped by conflict, and dialogue degenerated into sparring between two armed factions – Operation Dignity, which railed against “Islamic extremists”, and Libya Dawn, a patchwork of conservative Misratan businessmen, Muslim Brotherhood supporters and armed groups such as Ansar al-Sharia.

A rival government to Thinni’s has declared itself in the capital of Tripoli. Backed by Libya Dawn, it is extending its influence across Libya. In July, Thinni’s government signed onto a peace framework crafted by UN special envoy Benardino Leon, which the Tripoli-based government rejected as illegitimate. A new round of peace talks began in Geneva on Tuesday.

Also on Tuesday, Thinni made a surprise announcement in a television interview that he was planning to step down, but as of Wednesday morning, he had not formally resigned. Prior to this announcement, Thinni spoke to Al Jazeera about the threats facing Libya, both external and internal.

Al Jazeera: What are the primary challenges facing your government?

Abdullah al-Thinni: Since 2014, our Tobruk-based government has been facing an incredibly complex situation. It is difficult to understand if you are not here – we are facing both external and internal threats, the most dangerous certainly being terrorism and its unthinkable economic consequences. Attacks on oil wells and pipelines are stopping the export of gas, which the country has relied on as its main basis of wealth.

Attacks by forces related to Libya Dawn have devastated our economy. In Benghazi, fighting has infested the heart of the city and killed 2,000 people. Today, despite our army controlling most of the districts, fighting continues with thousands displaced… But the main concern is for our people.

The war is now dramatically impacting the lives of Libyan citizens, giving way to a black market for the smuggling of weapons and fuel. All of this is starving people, and the fact that the West has closed its eyes to this is alarming.

Al Jazeera: How much of a concern is the threat posed by the Islamic State of Iraq and the Levant (ISIL)?

Thinni: The whole world, especially governments in the West, must understand that fundamentalist militias and extremist religious groups are responsible for the current chaos in Libya.

The authorities in Tripoli and the Muslim Brotherhood, which supports them, have participated in the instability by creating ideal conditions for terrorists.

Al Jazeera: Why do you believe the Tripoli-based government has worsened the threat?

Thinni: First of all, let me say that what you call the “Tripoli government” is an institution that does not exist, invented by forces that should have no recognition. Indeed, the international community does not recognise any authority but our own.

Since last summer, the armed groups of Libya Dawn have destroyed government infrastructure and buildings. We are painstakingly trying to recreate structure in the east of Libya.

Despite appearances, the institutions in Tripoli are controlled by Islamist militias, facilitating the growth of terrorism in Libya and its neighbours. They are a threat to Europe as well.

Al Jazeera: How do you respond to claims that the peace framework chaired by UN special envoy Bernardino Leon, which your government signed, is illegitimate?

Thinni: We waited for months so that the dialogue would not fail. We were seated at every table for negotiations with a desire to remedy the situation and help our citizens, who are suffering the highest consequences of this war. Now, I hope that the UN Security Council will take measures against those who obstructed the negotiation process through sanctions.

Al Jazeera: What are your government’s plans for the future, especially given the Tripoli authorities’ refusal to back the framework?

Thinni: The Tripoli authority was and still is illegal. Dialogue has failed only because of them. We tried to deal with these authorities for the country’s sake, but we are the only legitimate government. We care about the future of our people, and so are considering alternative solutions that until now, we have chosen to avoid. If dialogue continues to fail, we will attack the capital.

Some factions, but not legally-installed government, agree framework for peace following UN-brokered talks in Morocco. 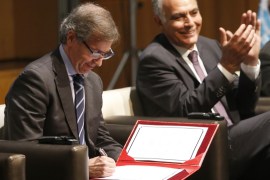 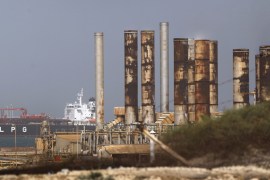