Dozens of women have demonstrated in front of Mexico’s Interior Ministry in the capital to protest against domestic violence.

Congresswomen and activists in Mexico City on Monday lay on the ground imitating a crime scene with chalk outlines around their bodies, while chanting “gender alert in the State of Mexico”.

The “gender alert”  was created in the city of Ciudad Juarez after reports of widespread violence against women. The initiative entails new funds to strengthen protection and help for the victims.

The protesers called for the setting up of the “gender alert” mechanism in all municipalities across the State of Mexico, one of the country’s 31 states.

UN officials has said Mexico ranks among the world’s 20 worst countries for violence against women.

In the State of Mexico alone, more than 2,300 women have been killed over the last nine years, the National Citizen Femicide Observatory said.

“The State of Mexico is the most violent state for women [in the country],” Congresswoman Xochitl Arzola Vargas, who joined the protesters, was quoted by the AP news agency as saying.

“In Ecatepec district, for example, the figures surpass those that for a long time made Ciudad Juarez, the ‘femicide city,’ she said.

“We have exceeded those figures by a lot, with nearly three times the number of female deaths.”

According to observatory, a coalition of 43 groups that document such crimes, six women are killed every day.

Only 24 percent of the 3,892 femicides the group identified in 2012 and 2013 were investigated by authorities, and only 1.6 percent led to sentencing. 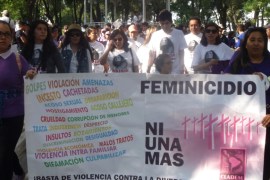 A woman is killed every four hours in Mexico, where domestic violence in the patriarchal society rages on. 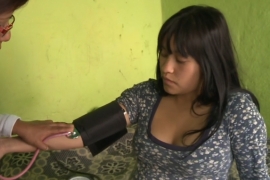 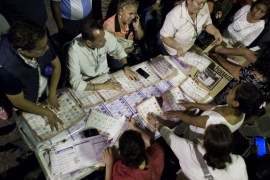