The Israeli parliament has approved a law that imposes up to 20 years in prison on people convicted of throwing rocks at moving vehicles, drawing condemnation from Palestinian activists and officials.

“This law is not about stone-throwing. It is about repressing any form of Palestinian resistance or protest to Israeli colonisation and occupation,” Ali Abunimah, co-founder of the Electronic Intifada website that runs articles and resources on Palestinian struggle, said in an interview on Tuesday.

He said that while, Israel continues to target Palestinians, shooting deaths of Palestinian protesters were committed “with absolutely no consequences whatsover”.

Late on Monday, Israeli lawmakers voted 69 to 17 to increase the punishments, approving legislation proposed after a wave of Palestinian protests last year in East Jerusalem.

Qadura Fares, head of the Palestinian Prisoner Club, an organisation that advocates on behalf of Palestinian prisoners in Israeli jails, said the new law was “racist”.

“This law is hateful and contradicts the most basic rule that the punishment fit the offence,” he said.

He said: “You are picking on the person responding to major injustices.”

This law is hateful and contradicts the most basic rule that the punishment fit the offence.

Under the law, stone throwers could face 10 years in prison, and up to 20 years if it is determined that they intended to seriously harm the occupants in a vehicle.

“Tolerance toward terrorists ends today. A stone-thrower is a terrorist and only a fitting punishment can serve as a deterrent and just punishment,” Israel’s Justice Minister Ayelet Shaked, of the far-right Jewish Home party, said in a statement.

Confrontations between Palestinian youths and Israeli police routinely degenerate into violent clashes, and stone-throwing has been a symbol of Palestinian resistance since the first Palestinian uprising, or Intifada, against Israel in the late 1980s and early 1990s.

Since 2011 three Israelis, including a baby and a girl, have been killed in the occupied West Bank after rocks were thrown at vehicles they were in.

Abunimah, however, noted that Israeli settlers have also committed similar violations causing injuries among Palestinians, but were “never punished”.

Prosecutors in stone-throwing cases have usually sought sentences of no more than three months in jail when the offence does not result in serious injury.

The law would cover territory, including East Jerusalem, but not the occupied West Bank, most of which is under the jurisdiction of the Israeli military.

Israel hands down about 1,000 indictments a year for rock-throwing, according to the Israeli Knesset.

Prime Minister Benjamin Netanyahu’s right-wing government faced growing calls to take action after the Palestinian protests in 2014 over the Gaza war, and the burning alive of a Palestinian teenager in a suspected revenge attack for the deaths of three Israeli teens. The new legislation was originally promoted by Shaked’s predecessor, centrist Tzipi Livni.

In his interview with Al Jazeera, Abunimah accused Netanyahu’s government of “appeasing the Israeli far-right” by passing the measure.

The Palestinians seek a state in East Jerusalem, the West Bank and Gaza Strip. US-brokered peace talks between Israel and the Palestinians broke down last year. 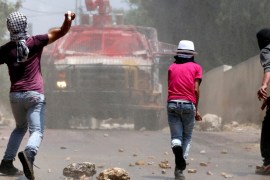 Diplomat says tough penalties on stone throwers is the latest discriminatory move by Israel against Palestinians. 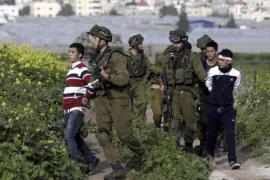 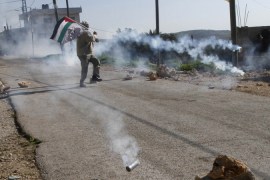