Most of those arrested after Israel boarded the flotilla have now either been deported or released but Al Jazeera camerman Ammar Hamdan, a Norwegian citizen who was covering the attempt to break the blockade, is still being held.

Al Jazeera reporter Mohammad Bakkali was deported to Rome. Israeli authorities told him that they planned to release and deport Hamdan on Wednesday back to Norway.

“The [former] president of Tunisia and the Spanish lawmaker flew this morning. There are another 14 who have begun the expulsion process,” a spokeswoman for Israel’s immigration authority told the AFP news agency on Tuesday.

Israel had on Monday commandeered the Swedish-flagged Marianne of Gothenburg, part of the Freedom Flotilla III, and accompanied it to the Israeli port of Ashdod.

Sixteen foreign nationals were on board along with the Israeli-Arab politician Basel Ghattas and an Israeli television reporter.

Ghattas and the reporter have been released, though Ghattas could face a parliamentary hearing on whether he should face sanctions.

The Marianne was part of a four-boat flotilla of pro-Palestinian activists who had been seeking to reach the Gaza Strip to highlight the Israeli blockade of the territory that they called “inhumane and illegal”.

The three other boats had turned back before the Marianne was boarded by the Israeli navy in an operation that took place without the deadly force used in a raid to stop a similar bid in 2010.

Speaking after being released from police custody on Monday night, Ghattas condemned Israel’s “illegal” commandeering of the ship, which took place in international waters.

“In the end, we see the Freedom Flotilla III achieved its main goal – to draw local and global attention to the humanitarian crisis in Gaza, which is a result of Israel’s siege of the Strip,” he said.

Ghattas said he believed the attempt and Israeli operation to stop it would spur “activists from around the world to bring flotilla after flotilla, until the blockade on Gaza is removed”,

The activists’ campaign came as Israel faced heavy international pressure over its actions in Gaza, with a UN report last week saying both Israel and Palestinian fighters may have committed war crimes during a 50-day conflict in the besieged coastal enclave last summer.

Israel says the blockade is necessary to stop weapons from arriving in the Gaza Strip by sea.

The reconstruction of thousands of homes destroyed during the conflict is yet to begin, and both Israel’s blockade and a lack of support from international donors have been blamed. 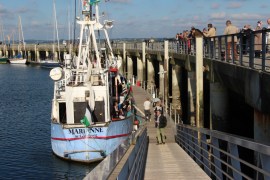 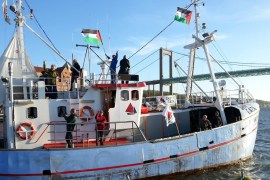 Activists say the Marianne was intercepted by Israel’s military around 100 nautical miles from Gaza’s shore.