UN-led talks aimed at ending the war in Yemen have been thrown into doubt amid uncertainty over whether rebel Houthi negotiators will attend, with reports saying the Shia rebels missed a flight to Geneva.

The Associated Press news agency, quoting airport officials, reported that a plane meant to carry the Houthis and their allies to talks left Sanaa International Airport on Saturday without the delegates on board.

The talks, set to start on Monday, were slated to be the first substantive meetings by all parties involved in the conflict.

A Houthi representative told the Associated Press that the Houthis objected to the idea of two separate delegations to the talks – one representing the embattled government, and one seen as representing a “coup”.

He said this arrangement created an environment aimed at pressuring the Houthis to withdraw from Sanaa, rather than continuing a broader multi-party discussion. The Houthis had initially welcomed the meetings.

The delegation representing the government of exiled President Abd-Rabbu Mansour Hadi arrived in Geneva on Saturday morning, an official from the presidency said.

A coalition of 13 aid organisations has called for a permanent ceasefire as the conflict has affected 80 percent of the population, or around 20 million people.

Al Jazeera has been to the southern city of Taiz, where a Houthi siege has strangled the supply of the most basic necessities.

Most government services have been cut because of the fighting around the city. Schools are shut, power is down, and supplies are running desperately low.

The relief groups have also called for the lifting of an air and sea blockade imposed by the Saudi-led coalition that launched a bombing campaign in late March in support of exiled President Hadi.

A five-day ceasefire last month allowed aid agencies to reach civilians caught in the fighting but UN efforts to extend the truce failed.

Rebel positions in their northern Saada stronghold were also hit, they added.

A wave of intensive overnight air strikes targeted arms depots around the capital and residences of people close to Saleh, including his brother’s home, south of Sanaa, witnesses said. 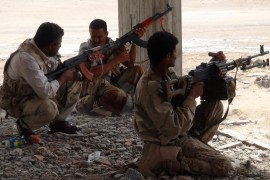 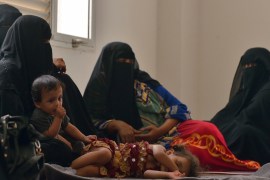