A spokesman for the Arab forces has vowed that the coalition would deliver a “harsh response” to Yemen’s Houthis following attacks on Saudi citizens, and will not be bound by any restrictions.

“The safety of Saudi Arabia is a top priority for the coalition and the Saudi armed forces. It is a red line they crossed.”

Asseri comments came hours after Saudi Foreign Minister Adel al-Jubeir proposed a five-day ceasefire in Yemen’s war to facilitate humanitarian aid to civilians, but only on the condition that the Houthi rebels also halt the fighting.

Jubeir made the announcement at a news conference with US Secretary of State John Kerry.

That means the coalition of Arab countries will cease air strikes “in all of Yemen.”

The exact date of the ceasefire will be announced “shortly,” Jubeir said, adding that it will only take effect as soon as the Houthi rebels agree and stop the attacks.

Kerry welcomed the proposal, calling on the Houthis and their supporters “use all their influence not to miss this opporunity to find a peaceful way forward.”

He also hinted that the ceasefire could be “renewable” if the fighting halts.

Reacting to the UN plea of Yemen’s ambassador to deploy ground troops, Kerry said “neither the US nor Saudis are talking about sending ground troops to Yemen.”

The announcement comes a day after a deadly fighting in Yemen’s southern port city of Aden, which reportedly left at least 120 people dead.

In an interview with Al Jazeera from the Yemeni capital Sanaa, Houthi activist and supporter Hussain al-Bukhaiti, said that it is likely that the armed group would accept the proposal.

But a ceasefire does not mean that Yemeni tribesmen will withdraw from areas they control near the border with Saudi.

Bukhaiti also said that the Houthis are open to mediation by Oman.

The rights group said the incidents, which happened last month, exemplify the grave threats to civilians in the embattled port city where Houthi rebels and their allies are fighting forces loyal to President Abd-Rabbu Mansour Hadi.

HRW said the two women were struck by gunfire in separate incidents on April 17 and 18, and died before relatives could find a medical facility to treat them.

Pro-Houthi forces also unlawfully detained 10 local aid workers for 14 days, releasing two only after payments were made. Deliberate attacks on civilians and taking hostages are war crimes, the group said.

HRW identified the victims as Sabreen al-Aboos, 20, and Neveen al-Taib, 42.

Despite weeks of aerial bombardment against Houthi positions, the conflict shows no sign of ending. 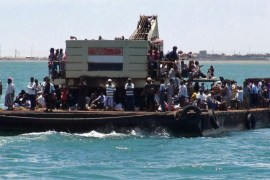 Ambassador to the UN urges international community to quickly intervene with ground forces “to save Yemen”.