Violent confrontations broke out in the American city of Baltimore hours after the funeral of a young black man who died after suffering a severe spinal injury while in police custody.

Rioting and looting in a pocket of Baltimore’s west on Monday prompted the Maryland governor to declare a state of emergency, a move that activated the deployment of members of the National Guard.

Maryland mayor Stefanie Rawlings-Blake also announced a weeklong 10pm to 5am curfew from Tuesday, saying that “too many people have spent generations trying to build this city for it to be destroyed by thugs, who in a very senseless way are trying to tear down what people have fought for”.

Extra police were deployed across the city and an American League baseball match to be contested by Baltimore’s Orioles was postponed.

Baltimore police captain Eric Kowalczyk said that one officer was “unresponsive” and that the attack took place “without provocation”.

Barack Obama, the US president, was said to be monitoring events.

“Today’s looting and acts of violence in Baltimore will not be tolerated,” Hogan said. “I strongly condemn the actions of the offenders who are engaged in direct attacks against innocent civilians, businesses and law enforcement officers,” he added, charging that violent acts “betray the cause of peaceful citizens seeking answers and justice following the death of Freddie Gray”.

Helicopter news footage showed people entering stores. Shops were looted and cars were set on fire. Smoke billowed from a pharmacy after it was apparently set ablaze.

Gray’s family, who were hoping to organise a peace march later this week, condemned the violence, and said the problem of police brutality was not solely caused by police.

“It’s about black men stepping forward and owning their portion of the problem,” the family’s lawyer, Billy Murphy, said.

“We live here. We love it here. It’s not perfect. It’s like being in a bad marriage but we’re not interested in a divorce. We love this city and we’re here to work as hard as we can and as long as we can until this problem has gone away,” Murphy said.

The violence came after thousands of mourners gathered to pay tribute to Gray, 25, whose death in police custody has become the latest touchstone in a national debate over police use of force.

Gray died on April 19, a week after being arrested. Gray was arrested after he made eye contact with officers and ran away. Officers held him down, handcuffed him and loaded him into a van. While inside, he became irate, and leg cuffs were put on him, police said.

Gray asked for medical help several times, beginning before he was placed in the van. After a 30-minute ride that included three stops, paramedics were called.

Authorities have not explained how or when Gray’s spine was injured. His injuries included three fractures in his neck vertebrae, a smashed voicebox and the severing of 80 percent of his spine.

At his funeral, the 2,500-capacity New Shiloh Baptist Church was filled with mourners, many of whom filed past Gray’s casket before the service began.

While the two-hour funeral was under way, Baltimore police said in a news release that the department received a “credible threat” to its officers. But it is not known if there is any link between that and the later confrontation with protesters.

Al Jazeera’s Shihab Rattansi, reporting from Baltimore, said police assembled outside a high school in west Baltimore after being alerted through a Twitter hashtag, #purge, that the students had wanted to protest over Gray’s death at 3pm.

“These high school students, they were 13, 14, 15, these kids came out and they were met by police who started throwing tear gas and pepper spray,” Rattansi said.

“It was amazing how young these kids were, they were throwing stones,” he said.

Just hours after the funeral, dozens of people sparred with police in riot gear outside a shopping centre in northwestern Baltimore. Some threw objects at the officers, who were wearing helmets and face shields.

Rattansi, reporting from an area in Baltimore two blocks from the pharmacy that was set alight, said the violence during the day appeared to be contained to a limited area of about “two square miles” and appeared to have calmed.

Avis Jones-Deweever, a racism analyst, told Al Jazeera that there were “thousands of people who have protested in Baltimore for days peacefully” against rough treatment by the police.

“Although what happened to Freddie Gray was a horrible incident, it was not an isolated incident,” Jones-Deweever said.

“No information has come out saying what happened in the back of a police van that led to someone leaving with a crushed spine,” she said.

“It doesn’t take that long to tell the truth, it takes a lot longer to construct a lie. The longer it takes for information to be released the harder it will be to establish trust between the community and police.” 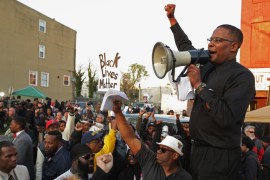 Thousands protest over US custody death of Freddie Gray 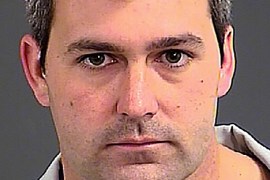 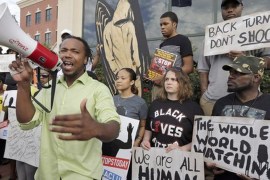