Khartoum, Sudan – June 30, 1989, is a day Mariam al-Sadeq al-Mahdi will never forget. She was in her family home in Omdurman, Khartoum, when National Islamic Front (NIF) intelligence forces came to arrest her father, then the prime minister of Sudan.

She recalls how she recited the Quran to stay calm as the men tried to break down the door.

“While I was waiting for them to barge in, I regretted not having military training,” Mariam told Al Jazeera in an interview at the National Umma Party headquarters in Omdurman. Leaning back in her big chair and clutching her hands together as she looked at the ceiling, Mariam recalled the memories of that day.

As the NIF forces entered the house, screams and chaos erupted. “They were searching frantically while shouting at me, ‘Where is your father?'”

They did not find her father, Sadeq al-Mahdi, on that day, as he managed to escape through a back door. But two weeks later, they tracked him down. He was in prison, and then under house arrest, for nearly seven years.

During this time, coup leader Omar al-Bashir cemented his grip on power. He dissolved the parliament, banned political parties and strictly controlled the press. In March 1991, Islamic law was introduced.

Bashir was confirmed as president by an election held in 1996. The same year, Mariam’s father escaped to neighbouring Eritrea. She was devastated by his fate and said getting on with life afterwards was a struggle.

“Many nights I could not sleep. I was in agony and despair,” she said.

Still, Mariam managed to finish her medical studies, graduating as a paediatrician. By her side was her husband, of whom she speaks fondly, describing their marriage as not traditional, but born from love and friendship.

Meanwhile, in a bid to restore his power, her father, Sadeq, established the Umma party’s military wing with his son, Abdulrahman, in Eritrea. Along the eastern border of Sudan, they fought the Sudanese government. Devastated by events in her country, Mariam decided to join her father’s military force in 1997.

Her daughter, then just over a year old, stayed with her in the military camp for a year until Mariam sent her to Egypt to be with her sister.

“She would sleep in the front of the truck while I would train to clean and load my weapon,” she recalled, adding that the little girl also used to play with “friendly snakes” kept in the weapon storage rooms to keep mice away.

Conditions in the military camp were harsh, but Mariam said the experience taught her a lot. “When you are in the field, death is so imminent. One moment we were having coffee in a cafe and the next, one of our convoys was blown up,” she recalled. “So you learn how to be transparent and direct, because any minute you can die. Transparency saves a lot of time.”

Mariam joined the military as a medical corporal, and after learning how to fight, she became the second in command on the eastern border. After two years of bloody battles, Sadeq struck a peace accord with the government, and Mariam turned to fighting the government through political means rather than arms. She is now a deputy leader of the National Umma Party, led by her father – one of Sudan’s main opposition parties.

When you are in the field, death is so imminent. One moment we were having coffee in a cafe and the next, one of our convoys was blown up. So you learn how to be transparent and direct, because any minute you can die.

While Mariam followed in her father’s footsteps, her brother chose a drastically different political track: He became an adviser to Bashir, the man who toppled their father. Visibly uneasy, Mariam explained her dismay with her brother’s choice. “It is his decision. I can’t defend what he did. But he is my brother and I know he is a good person.”

She went on to explain how at times she found it difficult to deal with him, especially following the 2013 protests that killed more than 170 people, mainly students, in the streets of Khartoum.

RELATED: Q&A: ‘Violence is the last thing we need in Sudan’

Having her brother in the corridors in of power has in no way shielded Mariam from the hardships facing the opposition in Sudan, and she has been arrested several times. The most recent time, in August 2014, she was detained before even leaving the plane in Khartoum on her return from Paris, where she had attended a meeting between the Umma party and the Sudan Revolutionary Front (SRF), a coalition of armed opposition groups.

“I stayed in a dirty place. The light was on the whole time. I was not allowed to talk, know the time, or even read,” she said about her 28-day detention. “I was never tortured physically, only psychologically by being held in inhumane conditions and total isolation. When I would ask for my right to visits, they would tell me that no one had asked about me.”

An unexpected visitor to her cell became her companion. “There was a mouse,” she said, laughing. “I used to talk to it about what I felt and thought.”

But detention and intimidation have not deterred Mariam from calling for change. She is part of the Irhal campaign, which urges a boycott of Sudan’s April 13-15 general elections.

Arguing that Sudan urgently needs a change in leadership, she said she fears the path the current government is on could eventually lead to the break-up of Sudan – with more regions following the example of South Sudan, which seceded from the north after a 2011 referendum.

Despite her military background, Mariam is calling for a peaceful transition of power. She and her party have been involved in a national dialogue process that is now in disarray.

Umma and other opposition groups want a transitional government to be established, including parties from across Sudan, to govern the country for two to four years before new elections are held.

“We believe in dialogue, but we also believe this government should go,” Mariam said. “Change must happen. It must happen via civil ways rather than violent ways, because [otherwise] it would make all of Sudan pay.” 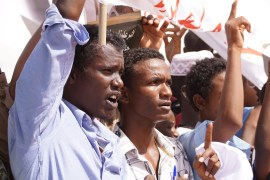 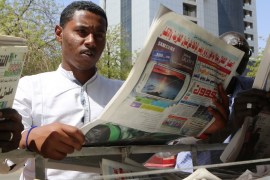 Activists afraid to voice their opinion in Khartoum as upcoming elections are due in a few days. 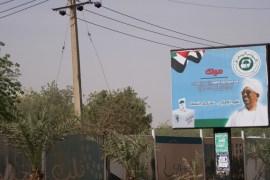