An Iranian diplomat kidnapped in Yemen and held hostage for nearly two years has been rescued in a military operation and returned to Tehran, Iranian state media reported.

Nour-Ahmad Nikbakht was seized in July 2013 while leaving his home in the capital Sanaa by gunmen suspected of being members of al-Qaeda.

Iranian state television broadcast images on Thursday of the diplomat arriving at Mehrabad airport in Tehran.

“I was kidnapped by unknown gunmen and terrorists as I left my home to go to work,” Nikbakht said.

He said “many efforts were made by soldiers from [Iran’s secret services], the intelligence ministry and the foreign ministry” to secure his release.

Nikbakht was held by suspected al-Qaeda fighters in a remote area between the southern provinces of Shabwa and Baida, tribal and Yemeni security sources said.

“I was in an extremely difficult situation and I did not know what was happening in the outside world,” he told state media.

Tehran had “refused the conditions set by the terrorists” for the diplomat’s release, Alavi was quoted as saying by the official IRNA news agency.

In January last year, another Iranian diplomat, Ali Asghar Assadi, was shot dead in an attack in a neighbourhood in Sanaa housing several foreign embassies.

Nikbakht’s release came less than a week after Saudi diplomat Abdullah al-Khalidi was freed and returned home after spending close to three years in al-Qaeda’s captivity. 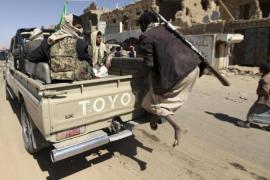 Iranian Foreign Ministry says diplomat injured when he resisted his attackers and was taken to hospital, where he died.