The presidents of Russia and Egypt have announced after talks in Cairo, that the two countries are to build Egypt’s first nuclear power plant together, as well as boosting natural gas trade among other deals.

Vladimir Putin and Abdel Fattah el-Sisi made the announcement on Tuesday at a joint news conference in the Egyptian capital, where they signed an agreement on the plant’s construction.

“If final decisions are made, it will mean not just building a nuclear power plant, it means the creation of the entire new atomic industry in Egypt,” said Putin.

The plant would be built at the existing nuclear site in Dabaa, on the Mediterranean coast west of the port city of Alexandria, where a research reactor has stood for years.

Putin’s landmark two-day visit, during which he was feted with much pomp and pageantry, came as Russia faces heightened tensions with Washington and the European Union over Moscow’s backing of armed separatist rebels in Ukraine.

Boosting electricity generation has been a priority for Egypt, where shortages lead to frequent blackouts in cities, especially in the summer, which have stoked popular anger.

Sergei Kiriyenko, the head of Russia’s Rosatom state-controlled nuclear corporation, said a power plant with four reactors would be built, producing 1,200 megawatts each.

In other key deals, Sisi said the two nations signed agreements to improve investment and the natural gas business, as well as create a Russian industrial zone along the Suez Canal, the expansion of which has been a priority project for the Egyptian president.

Egypt has also signalled renewed interest in purchasing Russian arms, although observers said any eventual deals would be unlikely to reorient Cairo’s dependence on Washington, which grants it up to $1.3bn in annual military aid.

Putin and Sisi also said they were both committed to fighting the “threat of terrorism” in their respective countries.

Sisi, who is fighting armed rebels in the Sinai region, said Putin had agreed with him that “the challenge of terrorism that faces Egypt, and which Russia also faces, does not stop at any borders”.

At the joint news conference, Putin also said that he is expecting a new round of talks on the Syrian conflict, following on from a meeting of some opposition figures and the Damascus government in Moscow last month.

“We look forward … to the next round of such talks, which ultimately I hope will lead to a peaceful settlement of the situation in Syria,” Putin said.

The Moscow talks, which ended on January 29, were not seen as likely to yield a breakthrough as they were shunned by the key political opposition in Syria and did not involve the main armed groups fighting on the ground. 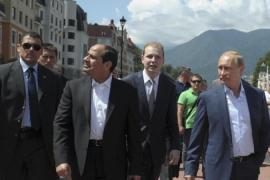 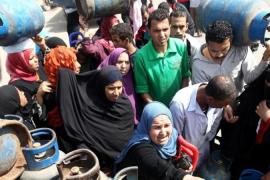 Egypt’s blackouts are here to stay

After exporting gas at low prices to Israel for years, Egypt finds itself in a deepening energy crisis.