Germany is set to speed up the deportation of asylum-seekers after weeks of disputes within the government coalition over the “overwhelming” surge of new refugees.

Chancellor Angela Merkel announced the agreement on Thursday to set up three to five reception centres nationwide that would expedite the process of either accepting or repatriating refugees.

“We have reached these agreements in the spirit that we will manage this,” she said, alongside Vice Chancellor Sigmar Gabriel of the centre-left Social Democrats and Horst Seehofer of the CSU party.

For weeks, Seehofer has been urging Merkel to reduce the number of the refugees in the country, saying that local authorities are struggling to deal with the refugee influx.

Seehofer called the deal reached with Merkel “very, very good”, and said that his relationship with Merkel has been “cemented again”, but stopped short of withdrawing his threat to file a legal challenge against the government over its refugee policy.

However, opposition parties criticised the agreement, saying it is too difficult to implement given the massive number of refugees seeking to reach Germany.

About 758,000 have already arrived so far this year, with the number expected to reach one million by the end of 2015.

“It is questionable if tens of thousands can be sent back in a relatively short time. That would be a real departure from the current practise of allowing even those denied asylum to stay and lead a life,” said the centre-left newspaper, Sueddeutsche Zeitung.

Robert Habeck of the Green Party said: “People are waiting for half a year before their asylum applications can even be submitted. It is a complete mystery as to how the federal government can conclude the process within a few weeks in the special reception centres.”

Related: Refugees will change Europe for the better

The Party of Democratic Socialism censured the agreement as a further violation of refugees’ rights.

“It [the deal] is about expelling at all cost. Asylum rights are once more being curtailed,” it said in a statement.

In addition, Germany is facing pressure from its neighbours eager for Europe’s top economy to take the refugee task off their shoulders.

Like Berlin, Sweden has opened its doors to refugees and is buckling under the load.

In a stark message to migrants, Sweden’s Migration Minister Morgan Johansson said at a press conference Thursday: “If you have a roof over your head in Germany, it’d be better if you stayed there.” 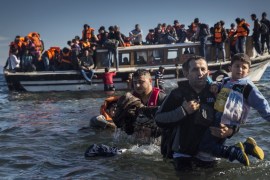 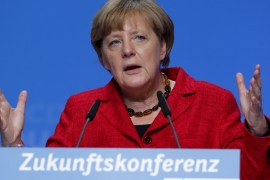 Support for Merkel’s bloc slips as coalition parties remain at odds over transit zones for refugees.