Israel has suspended the European Union’s role in the Middle East peace process over a decision by the bloc to label products produced in Israel’s illegal settlements in the occupied territories.

Prime Minister Benjamin Netanyahu “instructed the foreign ministry to re-evaluate the role of EU institutions in the political process with the Palestinians”, Emmanuel Nahshon, foreign ministry spokesman, said on Sunday.

Until that re-evaluation is completed, all contacts with these EU institutions have been suspended, he said.

Among others, the EU has a special representative to the Israeli-Palestinian peace process.

Nahshon stressed that Israel was continuing separate contacts with individual EU member states, such as Germany, Britain and France.

He did not elaborate on the practical implications of Netanyahu’s instructions.

The peace process has been long frozen and a last attempted round collapsed in April 2014 – led by Washington, but supported by other international mediators such as the EU, UN and Russia.

Earlier this month, Israel announced it would also suspend several committee talks and forums with the EU in retaliation for the labelling of settlement products.

OPINION: Essay: Why BDS is a feminist issue

The EU’s executive said on November 11 that agricultural and cosmetic goods produced in the settlements must be labelled as such, rather than just as coming from Israel.

Aside from fresh fruits and vegetables, the guidelines required labels on wine, honey, eggs, olive oil and poultry. Labelling for other products will be voluntary.

Netanyahu decried the move, saying the 28-member EU “should be ashamed” of itself.

But Palestinian leaders and groups welcomed it, praising the bloc for taking concrete action on the issue of illegal settlements.

The EU has long criticised Israel’s policy in the occupied Palestinian territories.

Such settlement construction in the West Bank and East Jerusalem violates international law.

Israel called the labelling “hypocritical” and said it once again “singles out Israel and not the 200 other conflicts around the world”. 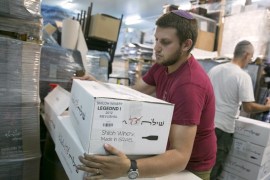