New York – An appeals court in the US has given Muslim Americans another chance to sue the New York Police Department for its surveillance on them.

Last year, a lower court had dismissed the case in which the police were accused of deliberately targeting Muslims because of their religion.

However, the 3rd US Circuit Court of Appeals in Philadelphia reversed a lower court’s decision, finding the plaintiffs had legal standing to assert claims that the country’s so-called counterterrorism programme violated their rights. 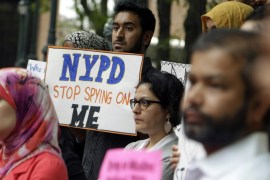 US court revives lawsuit over NYPD spying on Muslims

NYPD under fire for spying on Muslim students