Egyptian President Abdel Fatah el-Sisi has defended restrictions on citizens’ right to demonstrate, saying that protests could cause more harm to the country’s already battered economy.

Tuesday’s remarks came at the Police Day national holiday which in 2011 marked 18 days of protest that toppled President Hosni Mubarak after a 30-year rule.

The law, which passed last year, punishes all unauthorized demonstrations with up to five years in prison and hefty fines.

Sisi’s remarks prompted concern among human-rights activists, who say a law restricting protests and other legislation enacted by Sisi in the absence of a parliament will roll back freedoms gained in the 2011 uprising that toppled Hosni Mubarak.

Sisi steered away from mentioning the various security laws, which have been condemned by rights groups at home and abroad, in his speech.

“I am more keen on human rights than anybody … . But take care when you demand your rights. Take care, don’t take us down with you,” Sisi told hundreds of police officers and many senior government officials.

“I never say that demonstrations are denied. We put the issue of protesting in a distinguished position … But the 90 million people [of Egypt] want to eat, drink, live and be assured about their future.”

The Egyptian military rule ended months of economically ruinous anti-government unrest through harsh security crackdowns that jailed thousands of conservative and liberal activists alike, including people for demonstrating without a police permit.

Sisi called on activists to support government efforts to improve healthcare, education and the lives of the poor, suggesting that potential protests and demonstrations would hinder such efforts.

Egypt has been trying to repair an economy laid low by political upheaval, street protests and violence since the anti-Mubarak revolt. The government has launched economic reforms to win back foreign investors since Sisi became president.

Sisi was elected virtually unopposed last May, almost a year after the military he then led toppled freely elected President Mohamed Morsi.

Egypt will hold a long-awaited parliamentary election in two phases starting in March. Sisi hopes the vote will deliver stability after years of upheaval.

Critics call the vote a sham given what they say is Sisi’s clampdown on political freedoms. 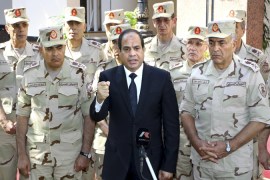 What does the imprisonment of the network’s journalists reveal about Egypt’s attitude to freedom of speech? 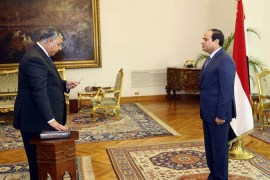 Mohamed Farid El-Tohamy, seen by many as a hardliner in crackdown anti-coup supporters, is forced into retirement.