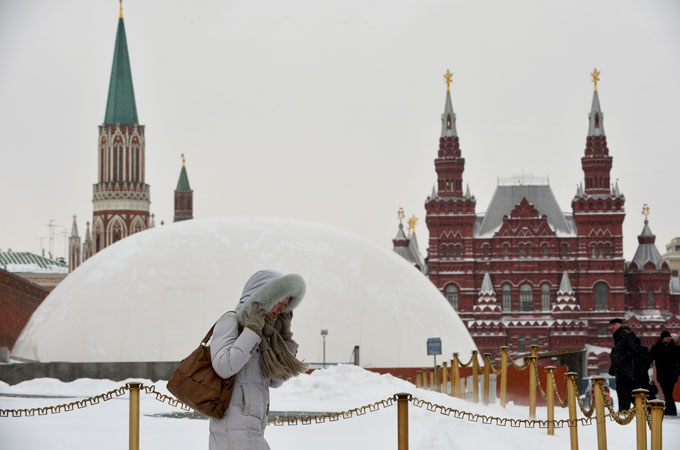 The mausoleum of Soviet state founder Vladimir Lenin at the Red Square in Moscow. Parts of the city had up to 35cm of snow. [AFP]

The long cold winter refuses to abate across the northern hemisphere with snow and ice continuing to cause disruption for many. Many parts of Europe, North America and Asia continue to struggle against the freezing conditions and it looks set to last for a little while longer yet.

Even Russia has been faced with exceptional weather. Another round of heavy snow enveloped Moscow on Sunday.

In some parts the visibility fell below 100 metres as blizzards struck. Unlike airports further west, the Moscow airports were able to cope and stayed open throughout.

Ukraine, on the other hand, did not remain quite as mobile. Kiev saw around 50cm of snow falling over the weekend. Public sector workers were ordered to stay at home on Monday as authorities were forced to declare a state of emergency.

A month’s snowfall was recorded in just two days, Stopping traffic and leaving many vehicles buried under snowdrifts. More than 600 towns and villages suffered power cuts.

Likewise, the UK has also grown weary of the winter weather. Northern areas have been hardest hit with thousands of people in Scotland and Northern Ireland suffering power cuts as power lines were downed and electricity poles damaged.

Some rural areas have now been without power for five days and the freezing conditions could last for much of this week. Snow drifts have reached over three metres in places. Matters have been made worse by the brisk northeasterly winds which will add to the wind chill.

Across the Atlantic, winter storm warnings and advisories were issued from Colorado and Kansas and as far east as Pennsylvania after some areas saw up to 38cm of snow. Central Illinois recorded 15 to 25cm of snow as the storm swept across the Plains on its passage across the Appalachian Mountains and on towards southern New York and New Jersey.

It was a similar picture in northeastern China’s Inner Mongolia on Saturday. Heavy snow hit the city of Tonglia, leaving 5,000 passengers stranded at bus stations and the airport, as long distance buses and flights were cancelled.

We do expect snow in this part of the world, just as we do around the foothills of the Himalayas, and northern India’s Kullu Valley in Himachal Pradesh also received unexpected amounts of heavy snowfall. Despite, its late arrival, it does seems to be well received here as it inevitably provides a boost to the tourism industry.