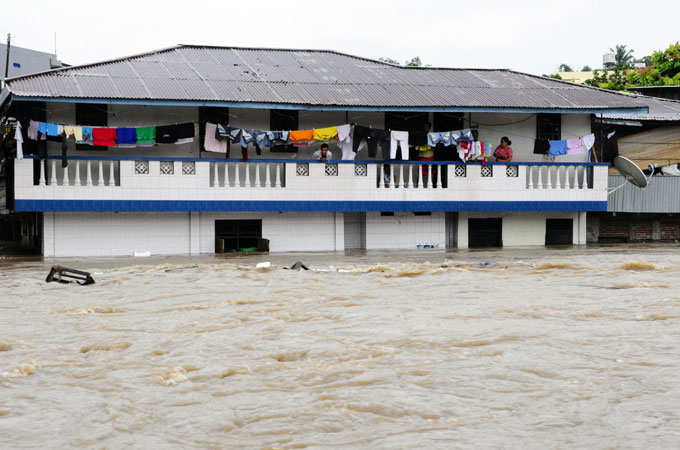 Torrential rain has caused widespread floods which have triggered landslides in northern Indonesia. At least 15 people are known to have died as the flood waters rose to two metres in places.

The worst of the flooding occurred in the north Sulawesi provincial capital of Manado, some 2,200km to the northeast of Jakarta. A staggering 242mm of rain was recorded here in the 24 hours up to 0600GMT on Sunday.

This came after days of heavy rain had already swollen the rivers to the point of bursting their banks. The result was a massive landslide which buried 14 of its victims in mud from hilly parts of the city. One other person was swept away by the flash floods.

Search and rescue teams are still looking for survivors in eight sub-districts of the province which were also hit by floods. Hundreds of police, soldiers and residents struggled to get tractors and bulldozers across washed out roads as they tried to dig through the debris.

More than 1,000 houses were inundated by the flood waters from local rivers. Around 8,100 people are now seeking refuge in temporary shelters.

Seasonal rains and high tides have caused widespread flooding in recent days across much of Indonesia, which is the world’s fourth most populous nation. Millions of people live in mountainous regions and near flood plains that are close to rivers.

Floods and landslides are common here, especially during the rainy season. A problem made worse by illegal logging or the clearing of farmland that strips away natural barriers to such disasters.