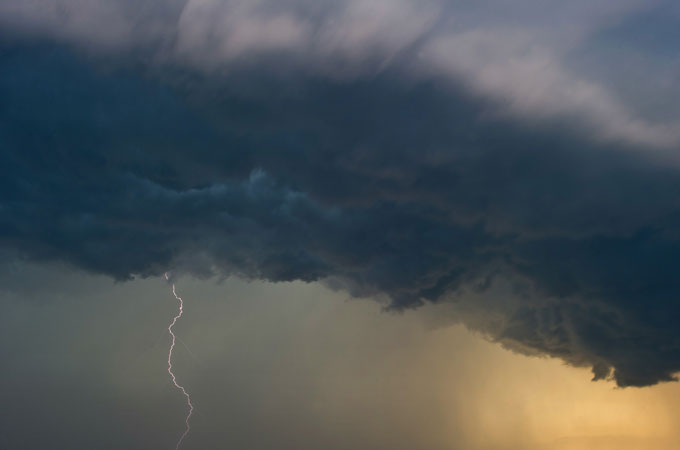 Thunderstorms broke out across much of the south of Western Australia, bringing small hail, damaging winds and torrential rain. [EPA]

Stormy weather swept across southern parts of Western Australia on Monday bringing with it some much needed rainfall following a desperately dry winter. Severe weather warnings remain in force here with another wintry blast expected to arrive over the next few days.

On Monday, a cold front brought squally showers and thunderstorms in from the west. Temperatures struggled to reach the mid-teens with numerous reports of small hailstorms. One such storm left the ground white, as if there had just been a dusting of snow.

Bickley, in the Perth Hills received 67mm of rain. Indeed much of the higher ground had 40mm or more.

In the city itself, Perth recorded 27mm of rain which is around a third of the monthly average of 87mm. There were good rainfall totals right across the Wheatbelt with farmers welcoming much-needed falls of 15 to 30mm of rain which will boost yields on all grain crops.

The winds in and around the Perth area exceeded 100kph. Mandurah had a gust of 102kph and Rottnest Island had a gust of 96kph. Around 9,000 homes and businesses were without power for a good part of the day.

The next bout of severe weather is already having an impact (Tuesday into Wednesday). Cape Naturaliste recorded a gust of 117 km/h on Tuesday. As the system moves through,it is likely to bring gusts in excess of 125kph. That could cause significant damage to homes and property in the region.

Higher than normal tides are also likely in low-lying coastal areas and dangerous surf conditions could lead to significant beach erosion. According to the Bureau of Meteorology, this system is expected to be windier than a typical winter front and is likely to produce the kind of weather that is only seen once or twice a year.