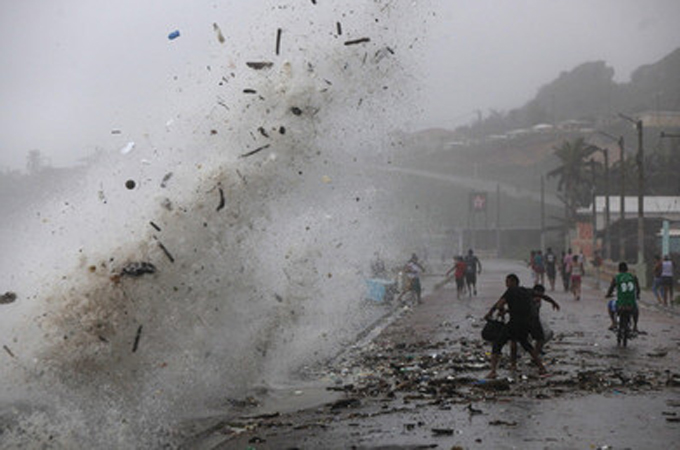 The moment a wave hits the coast during the passing of Tropical Storm Isaac in Enriquillo, Dominican Republic. [EPA]

A slow moving disaster seems to be unfolding for Hispaniola as swelling rivers swallow up homes and farms in Haiti and the Dominican Republic. This has the potential to become catastrophic for two countries already battling against major environmental challenges.

Lake Enriquillo in the Dominican Republic and the smaller Lake Azuei in neighbouring Haiti have steadily increased in volume over the last few years. In the process, trade has frequently been disrupted by the occasional blocking of a key cross-border highway.

Enriquillo is the largest lake in the Caribbean and it began rising during a year of heavy rains and it has been rising ever since. These two lakes are a mere five kilometres apart and are fed by some of the same streams.

The rate of these lakes rising has increased noticeably in recent years, especially in 2007 and 2008 which were particularly wet. Tropical Storm Isaac then dumped even more water on the region last month, exacerbating the problem.

The spread of Enriquillo has flooded 16 communities in two provinces. Vast areas of agricultural land have been lost along with over 1,000 properties. In all, some 10,000 families have lost cattle, farmland or their homes.

Both lakes do contain salt water because this low-lying region was once part of the ocean. There is also some speculation that massive deforestation on the Haiti side which has caused sediment to fill the lakes. At the same time, many canals have become clogged by refuse, slowing down or even bringing drainage to a halt.

Lake Azuei has expanded by about one metre per year over the past 10 years. It used to be confined to Haiti, but its waters now cross the border. Similarly Lake Enriquillo has grown at a similar rate and is now around double the size it was in 2004.

Many believe that the two lakes will soon merge since they are only separated by a road that often floods during heavy rainfall. Despite the obvious concerns, neither government has made any great effort to stem the rising water levels or to help the people displaced by them. Worryingly, it is still not apparent that there are any plans to do so in the long term.