Colombian tribal leaders have sentenced three suspected rebel fighters from the Revolutionary Armed Forces of Colombia (FARC) and an accomplice to a public flogging.

Nasa tribe accused the rebels of attacking civilians and disturbing the peace in Cauca, a region in the country’s southeast that has been plagued by unrest and violence in the past week.

The hearing was part of a push by the indigenous tribe to get both FARC rebels and government forces off their land.

The men and a teenaged accomplice were captured on Wednesday and the adults were given 30 lashes each on their legs.

Nasa tribe has been calling on rebels and the military to leave Cauca, saying they are tired of being caught in the crossfire of Colombia’s long-running conflict.

On Saturday, Colombia’s military took up positions in a field and fired at FARC rebels, who have been trying to claim the area.

Last week, the Nasa marched up to the top of a 2,300-metre peak and forcibly dislodged a clutch of soldiers from a strategic outpost.

A farmer was shot and killed on Thursday in the town of Caloto during a protest against the presence of soldiers in the region.

The Nasa’s homeland lies on a key corridor that rebels and their chief funding source, cocaine, regularly transit on their way to the Pacific coast.

The government alleges the Nasa are allied with rebels, which authorities say purchases the high-quality marijuana that many indigenous grow.

The Nasa’s standoff with government troops has made the past week perhaps the most difficult of Juan Manuel Santos’ two-year-old presidency, bringing Colombia’s conflict into people’s living rooms as it rarely has been in recent years and highlighting his government’s inability to control large parts of the countryside. 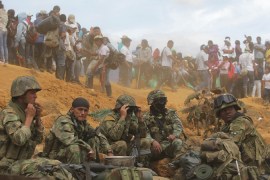 Nasa elders say they will decide fate of suspects involved in attack on civilians in country’s southwest. 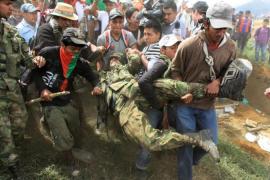 One person is killed and 26 injured as army tries to drive tribesmen away from a hill-top military base. 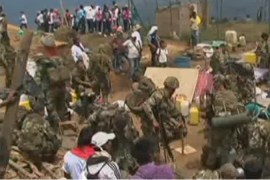