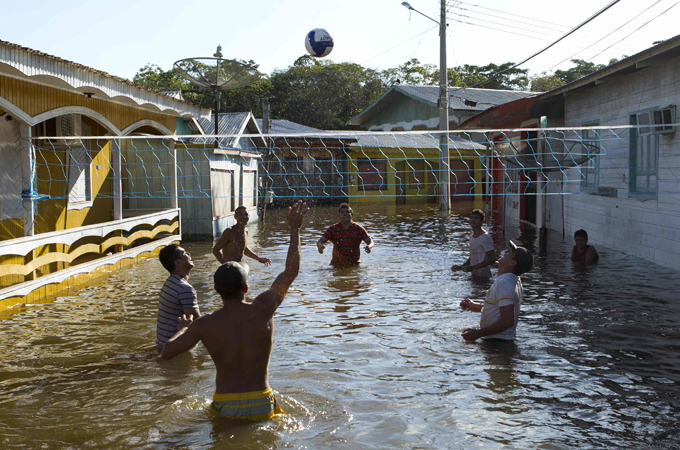 Residents play water volleyball a street flooded by the Rio Solimoes, one of the two branches of the Amazon River [Reuters]

Much of Brazil’s Amazon basin has been hit by torrential rain which has led to extensive flooding. Meanwhile, the northeast of the country remains in the worst drought to affect the area since the 1980s.

The rain forest, as the name implies is obviously an area that is used to heavy downpours, pretty much on a daily basis, but the long and protracted La Nina weather phenomenon has worsened the situation here dramatically.

Near-record flooding has displaced thousands of families, prompting officials to declare a state of emergency in 36 districts along the Rio Negro River. Water levels at a measuring station on the Rio Negro in Manaus, the Amazon’s largest city, were just 47cm below the record which was set in 2009.

Residents across the basin have been adding new floors to their homes in an attempt to stay above the floodwaters during the rainy season. They are also trying to escape from the snakes and rats that have appeared nearby.

Forecasts suggest that the rivers may rise above the 2009 levels over the next few weeks. This will make it the largest flood ever registered in the region. Ironically, the situation is so dire that despite the vast amounts of water out there, there is now the need to ration what clean water there is available.

Meanwhile, in Brazil’s northeast, they have been suffering their worst drought in 30 years. Well over 500 towns and cities have been affected. Again, La Nina appears to be responsible for the disaster unfolding here. La Nina is expected to ease over the next few months but it could take a great deal longer before we see true signs of any recovery here.