Authorities in Mexico have struggled to identify 49 mutilated bodies to gain clues into the latest in a series of massacres from an escalating war between Mexico’s two dominant drug cartels.

More than 24 hours after the discovery of headless bodies, forensic experts are yet to establish the identify of any of the corpses found near the northern industrial city of Monterrey after the fourth massacre in a month.

Mexico’s interior secretary, Alejandro Poire, said on Monday that all those incidents resulted from the fight between the Zetas gang and the Sinaloa Cartel, which have emerged as the two main forces in Mexican drug-trafficking and other organised crime. At least one of the two cartels is present in nearly all of Mexico’s 32 states.

Some victims in earlier body dumps have turned out to be bakers, bricklayers, even students – anyone who could be snatched off the streets in mass killings that one captured gang member said were designed to “cause terror”.

The 43 men and six women found on Sunday were dumped at the entrance to the town of San Juan in the municipality of Cadereyta about 175km southwest of McAllen, Texas.

Graffiti around the town of 4,000 people mark it as Zetas territory, including “100% Zeta” painted on a stone arch welcoming visitors where the bodies were dumped and “Z’s” painted on the home of San Juan’s priest.

There have been 74 killings in the first four months of this year in Cadereyta municipality, compared to 27 over the same period in 2011 and seven in 2010, according to figures from Nuevo Leon state prosecutors.

The massacre follows the discovery of 14 men left in a van in downtown Nuevo Laredo on April 17 and 23 people found hanged or decapitated in the same border city May on 4.

Drug violence has killed more than 47,500 people since President Felipe Calderon launched a stepped-up offensive when he took office in December 2006. 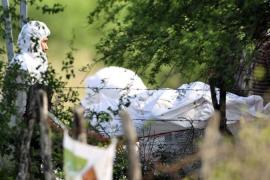 Remains of at least 50 dismembered victims found on main road leading to US border as casualties mount in drug gang war.