Joyce Banda, Malawi’s former vice-president, has taken over the running of the southern African nation following the death in office of President Bingu wa Mutharika two days ago.

Banda, 61, was sworn in as president at the National Assembly in the capital Lilongwe on Saturday. She becomes southern Africa’s first ever female head of state.

“I will well and truly perform the functions of the high office of the president of the Republic of Malawi,” Banda said as she recited the oath of office.

She later added: “I want all of us to move into the future with hope and with the spirit of oneness and unity.”

Malawi’s government only officially confirmed the death of her 78-year-old predecessor earlier on Saturday, after Mutharika died following a heart attack on Thursday.

The delay in the announcement had raised concerns about a political crisis because Banda had been expelled from  Mutharika’s ruling DPP party in 2010 after an argument about the succession, though she retained her state position.

“I sincerely hope there is no room for revenge,” Banda said after taking her oath.

“I hope we shall stand united and I hope that as a God-fearing nation we allow God to come before us, because if we don’t do that then we have failed.”

Banda appeared at a news conference earlier on Saturday to declare an official 10 days of mourning for Mutharika, who had ruled for eight years.

She ordered national flags to be flown at half-mast and the state broadcaster to play sombre music.

“I call upon all Malawians to remain calm and to keep the peace during this time of bereavement,” said Banda, flanked by members of the cabinet, the attorney general and the heads of the army and the police.

Asked whether she was assuming the presidency, Banda, a women’s rights activist, replied: “As you can see, the constitution prevails”.

In an interview with Al Jazeera, Banda said that while gender is a factor of her leadership, Malawians will support her as their first female president because of their confidence in the country’s democratic system.

“The election of me as a vice-president, and the election of [Liberian] President Ellen Johnson Sirleaf, shows that Africans have grown in democracy because it means that they have confidence in both men and women leading them,” she said.

“Africans have decided that the time is now for women to participate in leadership.

“I am confident that I am going to enjoy the support of Malawians, but it’s not going to be easy because of the state of the economy of Malawi.”

The Malawian constitution states the vice-president takes over if the president dies, but Mutharika appeared to have been grooming his brother Peter, the foreign minister, as his de facto successor.

Banda was one of Mutharika’s fiercest critics and some politicians reportedly tried to block her from assuming power.

She is expected to run the country until scheduled elections take place in 2014.

To convince the international community of the smooth transition, both the presidency and cabinet issued a statement assuring “that the constitution of the Republic of Malawi will be strictly adhered to in managing the transition”.

Both Britain and the US which had been major donors to Malawi until they froze millions of dollars in aid over rows with Mutharika over his policies and actions, urged a smooth transition respecting the constitution.

A statement issued by the White House on Saturday welcomed the appointment of Banda, saying: “By following constitutional procedures for this transition, the government and people of Malawi have reaffirmed their commitment to democratic principles and demonstrated the critical importance of sound democratic institutions.”

A joint statement by Herman van Rompuy, president of the European Council, and Jose Manuel Barroso, president of the executive European Commission, said: “Malawi has in the past 20 years become an example of democracy with its peaceful transitions of power and respect for the constitution and the outcome of elections.”

Meanwhile, the African Union Commission chief Jean Ping sent condolences sent to Banda, saying that Afrrica
had “lost one of its great sons” with Mutharika’s passing.

But in Malawi, there appeared to be little public sorrow at Mutharika’s death.

Many of the country’s 13 million people had viewed him as an autocrat personally responsible for an economic crisis that stemmed ultimately from a diplomatic row with former colonial power Britain a year ago.

Britain and others froze aid worth some 40 per cent of government spending, fuel supplies dried up and food prices soared, leading to popular unrest.

Medical sources said Mutharika’s body was flown to South Africa because Malawi’s energy crisis was so severe the Lilongwe state hospital would have been unable to conduct a proper autopsy or even keep his body refrigerated. 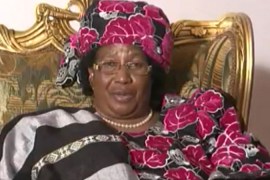 Banda was sworn in as Malawi’s first female head of state on Saturday. 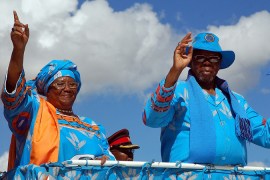 Banda was ousted from ruling party but retained her position as VP of Malawi, making her leader after president’s death. 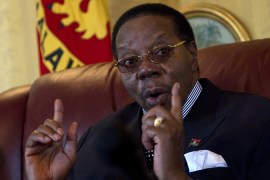 Ex-World Bank economist first known as champion of poor, but later blamed for Malawi’s economic woes, has died at 78.