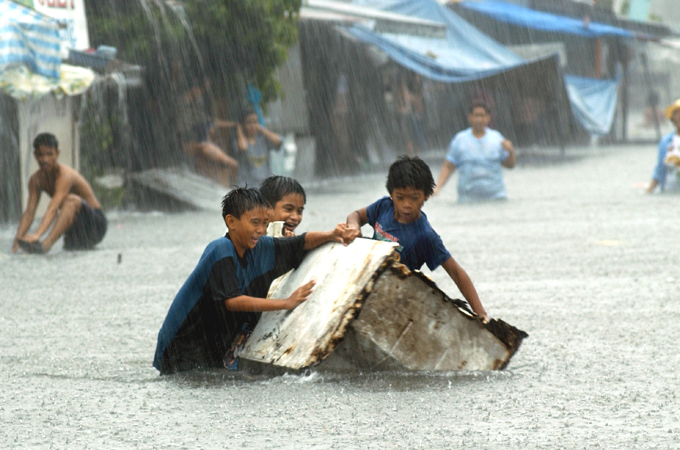 Fears are growing about flooding in the Philippines [Getty Images]

Super Typhoon Bopha is bearing down on the Philippines and the prospect of severe weather is raising fears of a repeat of the devastation wrought by a similar storm which struck almost a year ago.

Bopha lies in the South Pacific well to the eastsoutheast of the Philippines but it gathering strength as it tracks towards the islands at around 20kph.

Bopha is expected to lose its ‘Super Typhoon’ status, when winds are required to be at least 240kph, by the time it makes landfall at around 2100GMT on Monday 3 December. However, it will still be a Category 3 storm with sustained winds of 200kph and gusts of 250kph.

Bopha is then predicted to weaken as it moves across Samar, Nagros and Panay but it will remain a Category 3 storm with sustained winds of 155kph and gusts of 195kph.

The northern half of Mindanao, the central islands and southern parts of Luzon will see anywhere between 150 and 300mm of rain, hence the concerns regarding flooding and landslides.

Typhoons rarely affect the southern Philippines as they lie so close to the equator, they do happen.

As recently as December 2011, Typhoon Washi battered the same region.  Although the winds were nowhere near as strong as those predicted for Bopha (sustained winds were ‘only’ 95kph) the rainfall was torrential.

More than 200mm of rain was reported in some areas where rivers were already swollen by recent rains. Consequently, the rivers rose rapidly, by as much as 3.3 metres in less than one hour.

Torrents of water set off landslides in an area made vulnerable by the presence of large populations living in steep-sided valleys.

There were at least 1,268 deaths and the damage was estimated at over $48 million.

There are fears that similar amounts of rain will hit the same area but Bopha will hit after a spell of relatively dry weather, so river levels should be lower.

Coastal flooding may be more of an issue with Bopha it is predicted that the winds will cause a major storm surge of at least 1.5 metres with a peak expected to reach 2.3 metres at Calaya, an island well to the north of Luzon, at 1900GMT on Tuesday.

Al Jazeera will keep you updated on Bopha’s progress in our weather forecasts throughout the day and our reporters will be in the region to bring you the latest news on its impact.