US Secretary of State Hillary Clinton is seeking a truce between Israel and Hamas as diplomatic efforts are taking place in Cairo, Ramallah and Jerusalem, amid continued violence in Gaza.

Clinton arrived in Cairo for talks with President Mohamed Morsi on Wednesday after holding talks with Israeli and Palestinian officials in the occupied West Bank and Israel.

At least 149 Palestinians and five Israelis have been killed since the violence began eight days ago.

Late on Tuesday a Hamas official said an anticipated announcement of a Gaza truce agreement with Israel had been delayed until Wednesday.

Israel Radio quoted an Israeli official saying a truce was held up due to “a last-minute delay in the understandings between Hamas and Israel.”

Clinton spoke of a deal “in the days ahead”.

Al Jazeera’s Tom Ackerman, reporting from Jerusalem, said: “What they are looking for is a general statement coming from the Egyptian government to say there will be a 48-hour test period and then a long-term solution, rather than direct talks between Israel and Hamas.”

A UN Security Council statement condemning the conflict was blocked on Tuesday by the US, which complained that it “failed to address the root cause,” the Palestinian rockets.

Israeli Prime Minister Binyamin Netanyahu, who faces an election in two months that he is, for now, favoured to win, told Clinton he wanted a “long-term” solution.

Failing that, Netanyahu made clear, he stood ready to step up the military campaign to silence Hamas’ rockets.

Clinton assured Netanyahu of “rock-solid” US support for Israel’s security, speaking of seeking a “durable outcome” and of Egypt’s “responsibility” for promoting peace.

“In the days ahead, the United States will work with our partners here in Israel and across the region toward an outcome that bolsters security for the people of Israel, improves conditions for the people of Gaza and moves toward a comprehensive peace for all people of the region,” Clinton said on Tuesday.

Netanyahu, who has appeared in no immediate rush to repeat the invasion of winter 2008-09 in which more than 1,400 Palestinians were killed, said: “If there is a possibility of achieving a long-term solution to this problem with diplomatic means, we prefer that.

He was also to meet Abbas to discuss the crisis.

A delegation of nine Arab ministers, led by Mohamed Amr, Egypt’s foreign minister, visited Gaza in a further signal of heightened Arab solidarity with the Palestinians.

Arab league chief Nabil El-Araby said a ceasefire is not the the real issue facing Gaza.

More than a dozen Palestinians were killed in attacks on Gaza on Wednesday, according to medical sources.

Since then, at least 760 rockets have hit Israel while almost 400 others have been intercepted by Israel’s anti-missile system, the Iron Dome, according to the Israeli arm. 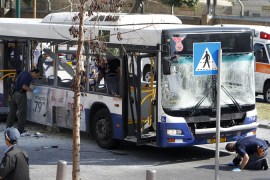 At least 24 people wounded in what police call a “terrorist attack” in Israel’s commercial capital. 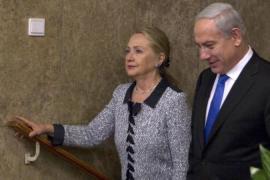 Hamas says a Gaza ceasefire agreement is being “held up” by Israelis, who have yet to confirm that a deal is imminent. 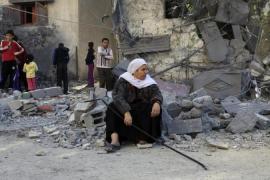 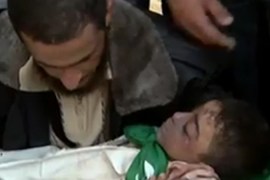